The Indian selectors on Monday sent out a clear message with regard to Yuvraj Singh's future as a Test cricketer by axing him from the squad for the forthcoming Test series against Australia next month.

He will get a chance to showcase his talent during the three-day tour match between the Indian Board President's XI and Australia, in Chandigarh from September 25-27. 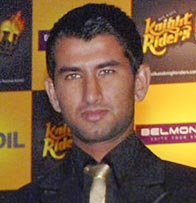 Pujara captained India A on the recent tour of England and Scotland, during which he scored 776 runs in 10 matches. He also hit a double hundred in the four-day match against the West Indies A on the same tour.

Yuvraj missed the second Test against Sri Lanka in July due to fever and could not make it back to the squad after his replacement Suresh Raina hit a century on debut and then scored 62 and 41 not out in his next two innings.

Zaheer Khan, who missed the Test series against Sri Lanka due to a shoulder injury, was included in the place of Munaf Patel.

Gautam Gambhir is also back in the team after missing the second and third Tests against Sri Lanka because of swelling in his knee.

Pacer S Sreesanth, who was also hit by an injury in Sri Lanka and ruled out of the tour before the start of the two-Test series after his knee gave way, is also back in the squad.

Abhimanyu Mithun and Wriddhiman Saha, who toured Sri Lanka, failed to find a place in the squad.

The first Test is in Mohali from October 1-5, while the second will be played in Bangalore from October 9-13.

Cheteshwar Pujara: A talent for tomorrow