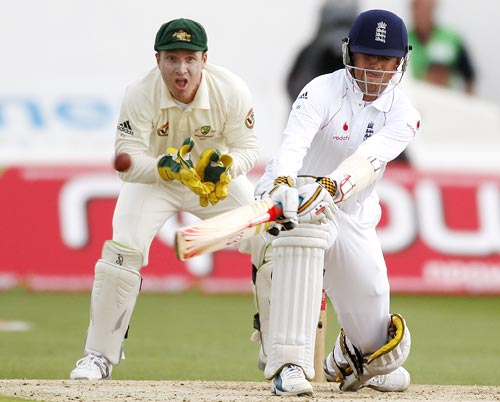 Graeme Swann scored a breezy 47 not out from 40 balls in the morning session to push England beyond 400 in their first innings on day two of the first Ashes Test in Cardiff, on Thursday.

Swann added 68 for the ninth wicket with James Anderson (26) and looked set to reach his second Test half-century when Monty Panesar was caught at slip by Ponting off off-spinner Nathan Hauritz for four. 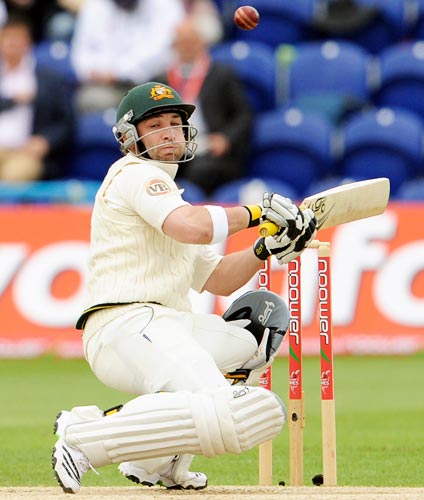 Australia opener Phillip Hughes, who scored 415 runs at 69.16 in his debut series in South Africa this year, gave a glimpse of his penchant for the unorthodox by slashing four boundaries through the off-side before lunch.

After the interval Strauss threw the ball to Flintoff and the big all-rounder responded by charging in from around the wicket from the River end and bowling four bouncers in his opening over. 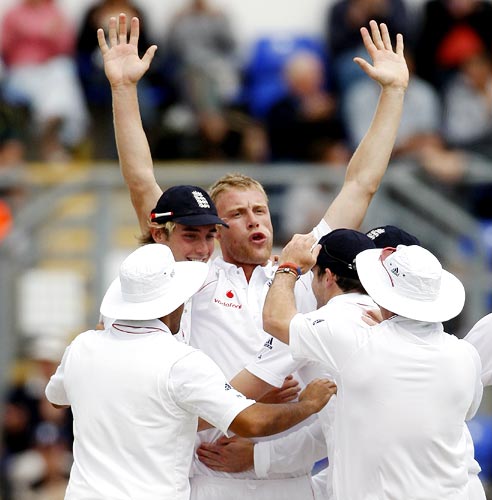 Flintoff (centre) is congratulated by his team-mates after taking the wicket of Hughes.

Flintoff regularly exceeded 145km an hour, beat Hughes several times outside the off-stump. He was finally rewarded when Hughes, who had scored only eight runs in 24 deliveries after lunch to reach 36, edged a catch to wicketkeeper Matt Prior who took a fine catch low to his right. 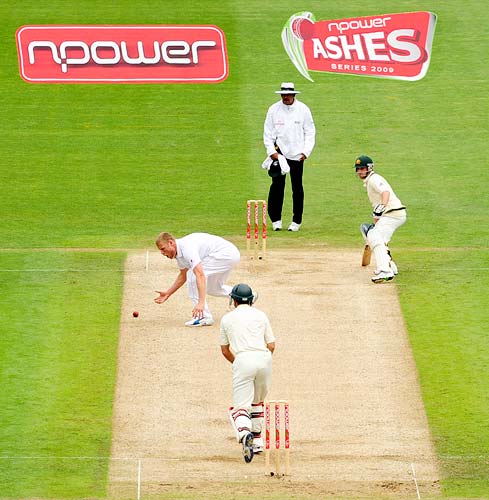 Australia opener Simon Katich survived a close chance on 10 after Flintoff a difficult return chance low to his right hand.

The Australian batsmen resolutely refused to take any chances with Katich content to work the ball both sides of the pitch and Ricky Ponting pushing it for singles with the occasional swift-footed pull. 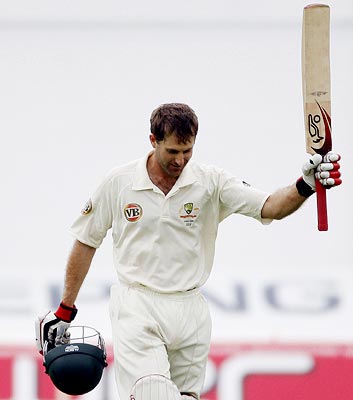 Image: Katich celebrates after completing his first century in seven Tests against England

There was scarcely a memorable shot from Katich, apart from a flashing off-drive to the boundary, but his gritty innings helped swing the momentum back to Australia.

"This series is a huge series for me. You can't hide from the past, there's nowhere to hide in Test cricket," he said. 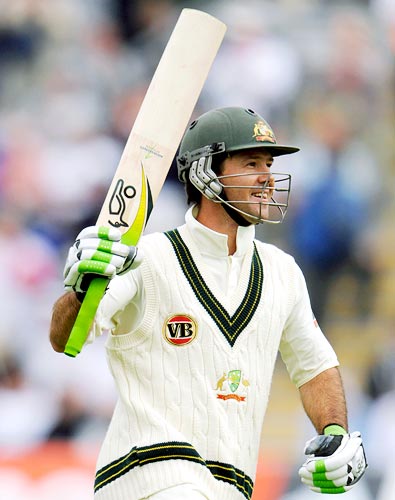 Australia captain Ricky Ponting scrambled a single to reach his 38th Test hundred off the penultimate ball of the day.

Ponting shared an unbeaten second wicket partnership of 189 with Simon Katich, a stand that laid the foundation of the Australian reply.

The skipper ended the day 100 not out, his 38th Test hundred.

'We didn't put the ball in the right place' 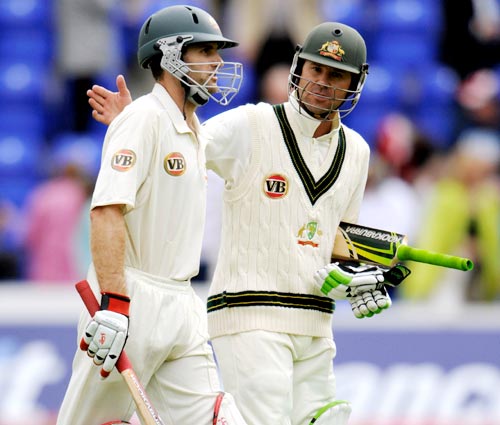 Image: Ponting congratulates Katich as they leave the field at stumps on day two

Ponting congratulates Katich at stumps on day two after the two batsmen shared an unbeaten second wicket partnership of 189 with captain Ponting unbeaten on 100 and Katich 104 not out.

England spinner Swann did not attempt to disguise England's disappointment at the Australians' close of play score.

"We didn't put the ball in the right place often enough. We can whinge and moan about the ball going soft, the wicket being flat and Katich not being given out lbw off me but that's the way of the game," he said.