When was a whole team named MoM? 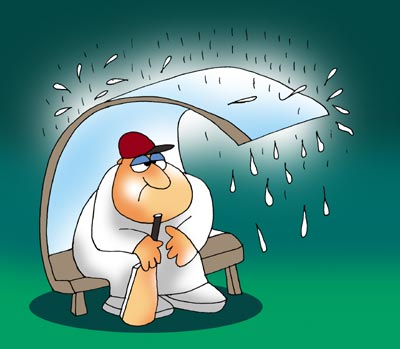 Image: An illustration of a batsman waiting for the rains to stop
Rajneesh Gupta

Name: Satish
In a 'no result' ODI, where a team has batted and the second team is unable to do so due to rain and the match is abandoned, what happens to the statistics? Are they counted?

The match will be counted and all the statistics taken into consideration. In fact, ICC's rules now say that a match will still be considered to have taken place if only the toss occurred and not even a single ball was bowled.

Name: Vineet Srivastava
How many players have scored more than 1000 runs in both one-dayers and Tests in a calendar year?

Since then, seven more batsmen completed 1,000 runs, both in Tests and ODIs in the same year. Australia's Ricky Ponting and Sri Lanka's Kumar Sangakkara are the only ones to do so on two occasions -- Ponting in 2003 and 2005; and Sangakkara in 2004 and 2006. 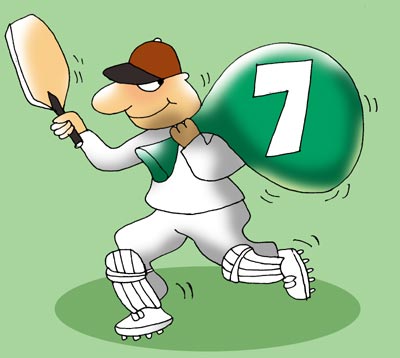 Image: An illustration of a batsman celebrating on reaching his century
Rajneesh Gupta

Name: Jayesh Doshi
In the Port-of-Spain Test between England and the West indies in March this year, there were seven centuries scored. Is it a record, or is there any instance of more centuries scored in a Test?

The seven centuries in the Port-of-Spain Test was rare, but it is not a Test record. The record is eight centuries, which was set in the 2004-05 St. John's Test between the West Indies and South Africa. Both teams scored four hundreds each in that Test.

The West Indies - England Test provided the fifth instance when seven hundreds were scored in a match. The other three instances are as follows:

Name: Sumit Barman
What is the record for the lowest runs conceded as extras in a Test match as well as ODI?

There have been quite a few instances of no extras in an innings in Test cricket. Pakistan's total of 328 against India at Lahore in 1954-55 remains the highest without an extra.

The record of least extras in a match (where both sides had a chance to bat) is two runs -- in the Lord's Test between England and New Zealand in 1958.

New Zealand holds the record of conceding least extras by a side in an ODI, in an innings of 150 or more. In the World Cup 1996 match against South Africa at Faisalabad, New Zealand did not concede a single extra in South Africa's total of 178 for five.

The record of least extras in a complete match (where both sides scored at least 100) is 4 runs between India and New Zealand at Chennai in 2003-04. 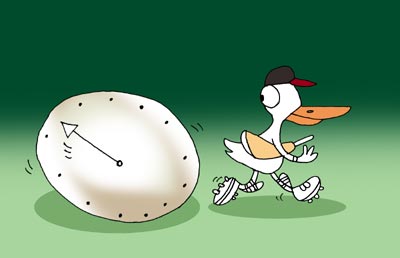 Image: An illustration of a duck depicting a batsman walking back to the pavilion after being dismissed for naught
Rajneesh Gupta

Name: Faizul
What is the maximum number of balls faced by a batsman without scoring a run and getting out in both ODI and Test matches. Who holds the record for India?

New Zealand's Geoff Allott holds the record of scoring the longest duck in Test cricket. Against South Africa at Auckland in 1998-99, Allott faced 77 deliveries (and batted for 101 minutes) before getting out for a blob.

In ODIs, West Indies' Runako Morton holds this 'distinction'. In the DLF Cup final in Malaysia in 2006-07, Morton struggled for 56 minutes and played 31 balls when his misery was finally ended by Nathan Bracken.

The corresponding record for India is held by Irfan Pathan (29 balls v Pakistan at Bangalore in 2004-05) in Tests and Eknath Solkar (17 balls v England at the Oval in 1974).

What is the maximum percentage of runs scored by a single batsman out of the team's total runs in both ODI's and Tests? Could you also provide more details, like who was it, how much, against whom, and when this happened?

Shakib's performance came in the third match of Tri-Nation tournament in Bangladesh in January this year. He made 92* off just 69 balls in Bangladesh's total of 151 (not 147) -- a percentage contribution of 60.93

The Test record in this regard is held by Australia's Charles Bannerman, who made an unbeaten 165 out of Australia's total of 245 in the first innings of the first-ever Test in cricket history (Melbourne, 1876-77).

Bannerman's innings thus contributed 67.35% of Australia's total. It may be noted here that nine wickets fell in that Australian innings, as Bannerman himself was retired hurt.

In ODIs, West Indies' Viv Richards made the highest contribution in an innings where a team played its full quota of allocated overs.

In the first match of 1984 Texaco Trophy against England at Manchester, Richards made an unbeaten 189 in West Indies' total of 272 -- a percentage contribution of 69.49. 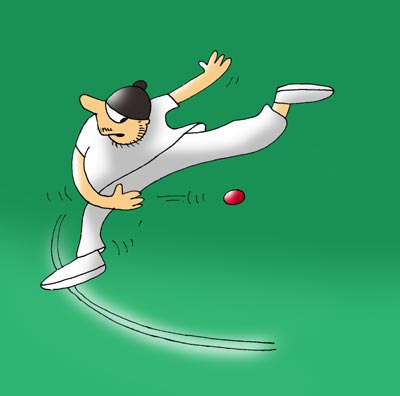 Image: An illustration showing Harbhajan's effort during the match against New Zealand on March 11, 2009
Rajneesh Gupta

Name: M K Vijayaraghavan
In the fourth ODI against New Zealand on March 11, 2009, Harbhajan took a catch near the boundary line, threw the ball down and jumped over the ropes. Was it not a wicket-taking catch?

Law 32.3 that describes a fair catch deals with you query. It says: "The act of making a catch shall start from the time when a fielder first handles the ball and shall end when a fielder obtains complete control both over the ball and over his own movement."

In the example cited by you, Harbhajan had complete control neither on the ball nor on his own movement; hence, it was not a catch. Harbhajan, in fact, did the right thing in throwing the ball down. Had he crossed the boundary rope with the ball in his hand, it would have been a six.

Name: Anant
I know Jonty Rhodes was named man of the match (MOM) for his awesome fielding. However, would you be able to tell me: 1. Who was named MOM for his leadership as captain? 2. When the whole team was named MOM for collaborative effort? Thanks

It seems only two players have got the award for captaincy skills alone (without contributing anything of significance with bat or ball). West Indian Viv Richards did so against India in a Nehru Cup match at Mumbai's Wankhede in 1989-90.

Australia's Mark Taylor was the second captain to be MOM, in a Benson and Hedges Cup match against West Indies at Sydney in 1992-93. Australia made only 101 in the match. Taylor contributed just 9 off 31 balls, but then took 4 catches in the field as Windies were bowled out for a paltry 87.

When New Zealand beat West Indies by four runs at Georgetown in April 1996, the whole team was given the award. About five months later, the whole Pakistan team were awarded in their match against England at Nottingham, which they won by two wickets. These are the only two instances when the whole team got the award. 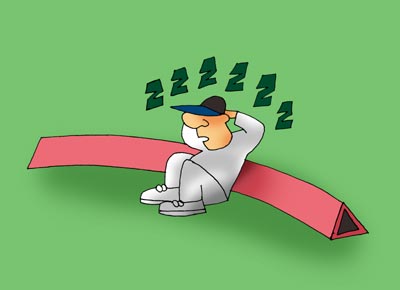 Image: An illustration showing a fielder sleeping near the boundary rope
Rajneesh Gupta

Name: Karthik
Has any batsman scored a century in Tests without hitting a single boundary? If none, who has the least number of boundaries in getting to his hundred in Tests and one-dayers?

It's not easy to reply to this question, as some of the scorecards of the earlier era don't have details about the number of boundaries hit by batsmen. The highest individual score (for which details are available) in Test cricket without containing a boundary (four) is Geoff Boycott's 77 against Australia at Perth in 1978-79. His innings included a four, but it was an all-run four and not a boundary four. It was against the Packer-decimated Australian attack, on a slow outfield, during the first innings of a match which England eventually won by 166 runs.

Boycott's innings lasted seven-and-a-half hours, during which he faced 340 deliveries. In the second innings, he spent two hours at the crease in scoring 23, again without a boundary. He thus became the only player to score 100 runs in a Test match without a single boundary.

The highest individual score in a one-day international without a boundary four is New Zealand's Adam Parore's 96 (off 138 balls) against India at Baroda in 1994-95.

Name: Sam
What is/are the score(s) between 0 and 100 that Sachin Tendulkar has never got out in Test cricket?

In addition, Tendulkar has also not been dismissed on 56 and 60, although he remained unbeaten on these scores once each.

Write a
Comment
Print this
article
ALSO
READ
MOST
RECENT