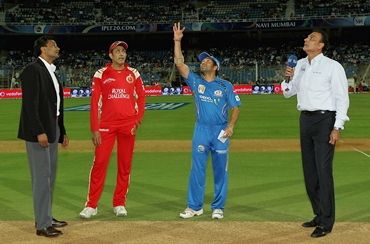 Mumbai Indians captain Sachin Tendulkar won the toss in the first semi-final of IPL-3 against Royal Challengers Bangalore and opted to bat.

"It looks a good wicket and we look to put up a decent total first up," said Tendulkar.

His opposite number, Anil Kumble, wasn't too perturbed about losing the toss.

"It's probably a good toss to lose," he reasoned, adding, "It looks a good surface with a lot of bounce and we will look to restrict them and chase down the total." 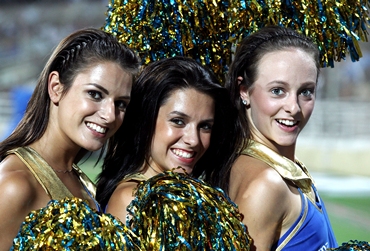 Image: Cheerleaders doing their routine at the DY Patil stadium

The record between the two teams in this edition of the IPL before the match was 1-1.

Royal Challengers had beaten Mumbai Indians playing away, while the Mumbai side returned the compliment when they toured Bangalore last week.

The two semi-final matches were scheduled to be played at Bangalore but were shifted to Navi Mumbai in the wake of the bomb blasts outside the Chinnaswamy stadium before the commencement of the match between RCB and Mumbai Indians. 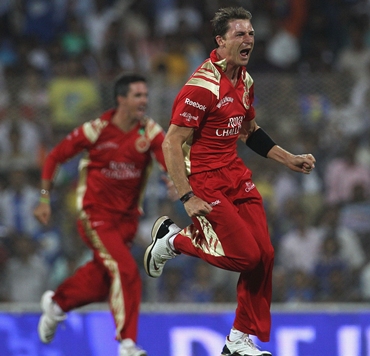 But the South African speedster had the last laugh, having the in-form batsman caught by Ross Taylor at cover. 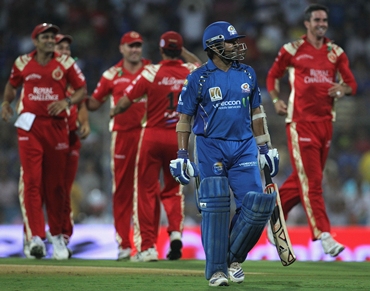 It was the first occasion that the Master Blaster was dismissed for a single digit score in this edition of the IPL.

Tendulkar was the holder of the Orange Cap, with 561 runs in 13 innings, going into the semi-finals, and Mumbai, who finished on top at the end of the league stage, needed him to fire and get the team off to a solid start. 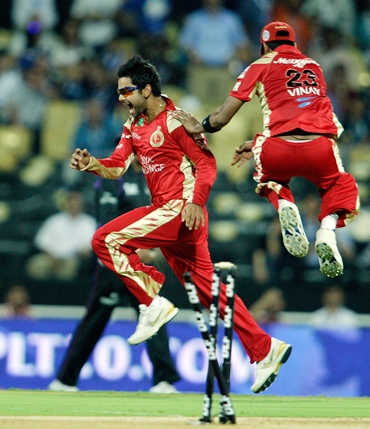 Shikar Dhawan (12) ran himself out in the fourth over and Mumbai Indians came under tremendous pressure, with the scorecard reading 29 for3 after 3.4 overs.

Quicky thinking by Kevin Pietersen and Virat Kohli fashioned the run-out. Dhawan called for a single but was sent back as Pietersen swooped on the ball and attempted a direct hit. The ball hit the stumps and as the batsmen tried to steal a single, Kohli did well to effect a run-out. 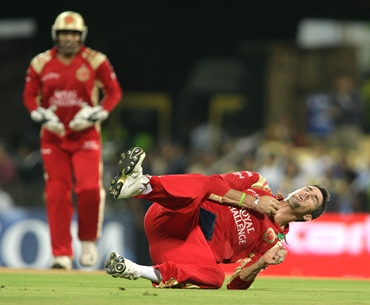 Kevin Pietersen was introduced into the attack in the eighth over and the Englishman struck with his second ball, having Abhishek Nayar (22) caught by Kumar at short fine leg.

Pietesen was also involved in the next dismissal, on this occasion pulling off a fine catch to dismiss JP Duminy (3) at short cover in the next over, bowled by Anil Kumble. 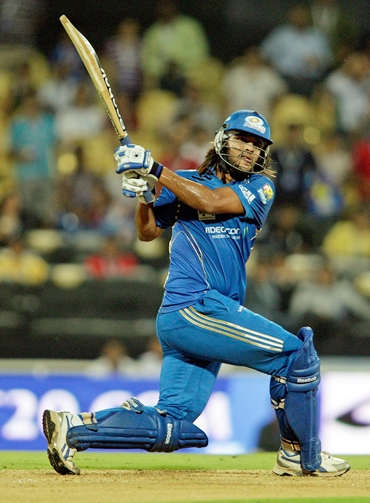 Going into the second strategic timeout - after 13 overs - Mumbai Indians were in some trouble at 93 for four - with no boundaries scored in 26 balls.

However, soon after resumption Saurabh Tiwary smashed a six off Virat Kohili to help Mumbai inch past the 100-run mark.

The long-haired left-hander combined well with Ambati Rayudu, putting on a 67-run partnership for the fifth wicket.

He top-scored for them with a characteristic 31-ball 52, inclusive of three hits to the fence and four over it, as Mumbai Indians scored 184 for five in their stipulated 20 overs, the last five producing a whopping 77 runs.

Drop that did not prove costly 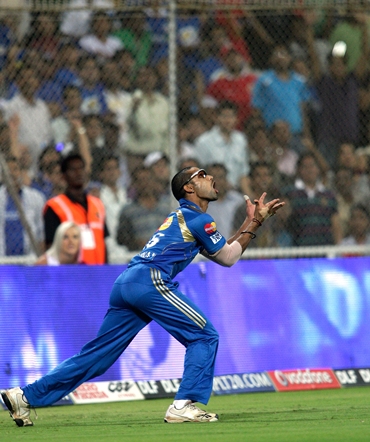 Image: Shikhar Dhawan is about to drop Jacques Kallis

Rahul Dravid (23) began Bangalore's chase on a confident note with a couple of boundaries off the opening over by Zaheer Khan.

Jacques Kallis (11) also started well but survived when Shikar Dhawan put him down at deep fine leg off Dilhara Fernando. 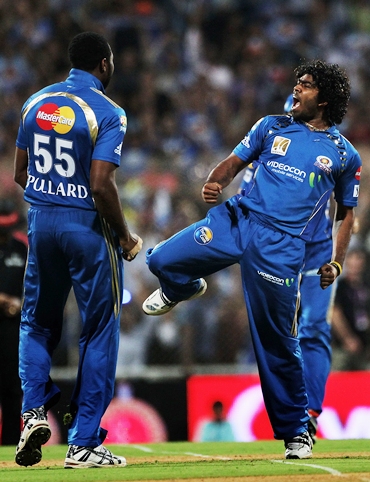 Jacques Kallis celebrated the reprieve he got from Shikar Dhawan with a boundary in front of square.

However, the South African did not last long, as Lasith Malinga induced an edge off his blade and Ambati Rayudu, behind the stumps, made no mistake with the catch. 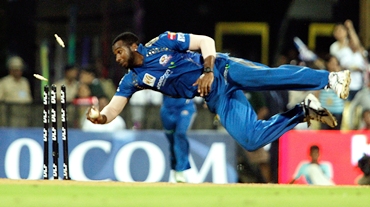 Robin Uthappa (26) began at his destructive best, smashing Harbhajan Singh for 18 runs in his second over, including two maximums.

And as a result, Royal Challengers went into the first strategic break - taken after nine overs - comfortably-placed at 80 for two.

However, disaster struck in the first over after resumption. Uthappa failed to read a slow delivery from Kieron Pollard and dragged it straight to Dhawan at deep square leg.

Off in the next ball, a terrible mix up resulted in Dravid being run-out, Pollard whipping off the bails in acrobatic fashion.

A pat for Pollard 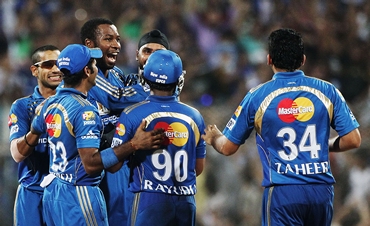 Image: Kieron Pollard gets a pat from team mates

Kieron Pollard was the pick of the Mumbai Indians bowlers with figures of three for 17, and deservedly named man of the match.

Uthappa was his first victim, the batsman failing to read a slow delivery and dragging it straight to Dhawan at deep square leg.

The West Indies all-rounder, Mumbai Indians' biggest buy in the auctions earlier this year, struck again in his second over, inducing an edge off Virat Kohli's (9) blade.

He then accounted for Manish Pandey (5), caught by JP Duminy at deep midwicket, for his third wicket in his final over.

Mumbai Indians won by 35 runs and registered their 11th win in this edition of the tournament, their fourth in the last five matches. 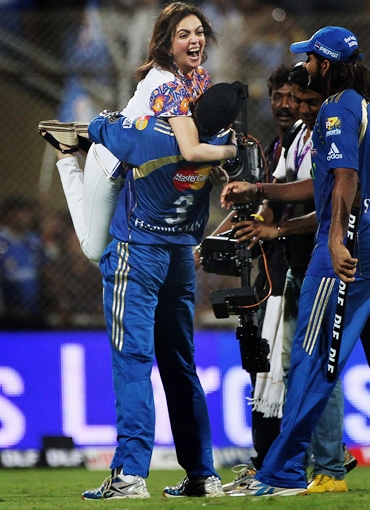 The Sachin Tendulkar-led outfit, having qualified for the last four for the first time in three attempts, ensured their love affair with this edition continued to the final stage with a clinical display.

It was Mumbai Indians' 11th win in this edition, their fourth in the last five matches, and took their winning tally to 12 matches in the last two seasons. It was also their eighth win in 12 matches batting first.