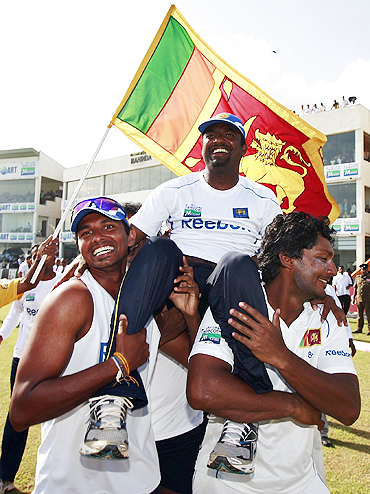 Image: Muttiah Muralitharan is lifted by his teammates after Sri Lanka's victory over India in the first Test

Prodigious spin propelled by an abnormally strong wrist and an iron resolve forged in bitter acrimony over his unique action took Muttiah Muralitharan to unprecedented heights in world cricket.

Muralitharan, 38, took his 800th Test wicket with his final ball in 133 Tests on Thursday. With Twenty20 cricket cutting increasingly into the Test programme it is a mark that is unlikely ever to be exceeded.

Muralitharan, son of a confectioner from Kandy and a member of the embattled Tamil minority, believes his best Test figures 16 for 220 at the Oval in 1999 remain his career highlight.

The one-off Test against an England side who had just beaten South Africa in a series was an unforgettable snapshot of his wondrous powers of flight and spin and the parallel emergence of Sri Lanka as a world force.

'It was mental trial beyond comparison' 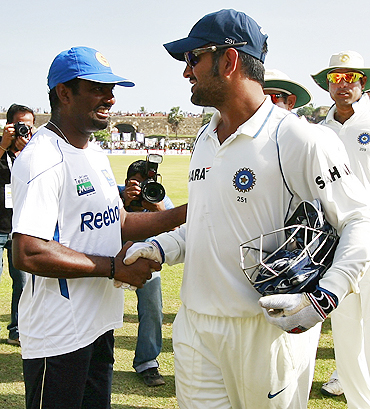 An hour before play began on a sunlit final morning, Muralitharan warmed up in the middle under the guidance of his impressive captain Arjuna Ranatunga.

By late afternoon, Ranatunga, Muralitharan and their teammates were celebrating a 10-wicket victory. Only a runout denied Muralitharan all the England second innings wickets.

"It was a mental trial beyond comparison," wrote one of the England openers Steven James recently.

"There was no physical threat, just an umremitting battle against a bowler of supreme accuracy and stamina, with pace and degrees of turn being varied almost imperceptibly."

Muralitharan's triumph followed an oblique but unmistakable message from England coach David Lloyd on the previous evening. "I have my opinions that I have made known to the authorities," Lloyd said.

The legitimacy of his action was repeatedly questioned 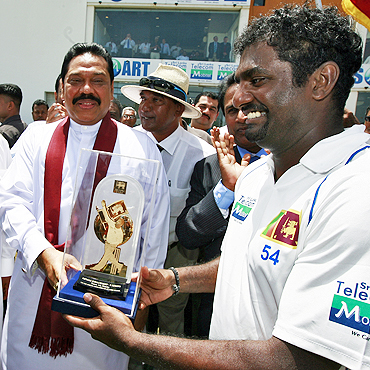 Lloyd's remarks were triggered by Muralitharan's standard delivery, which at first glance appears to break the fundamental rule of bowling, namely the obligation to deliver the ball without bending and then straightening the arm.

Ten days later, Muralitharan was no-balled repeatedly by Roy Emerson in a One-Day International. In January, 1999, Emerson called him again in Adelaide.

Muralitharan, taunted by the Australian crowds whenever he took the ball, announced he would never tour Australia again and seriously contemplated retirement.

He decided instead to fight back with the support of the Sri Lankan board and his career was rescued by the International Cricket Board (ICC).

Tests showed all bowlers flexed their elbows to some extent 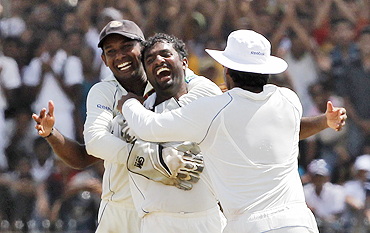 Image: Muralitharan celebrates with teammates after picking his 800th wicket

After the controversy continued to rumble, further tests revealed that all contemporary bowlers, and therefore logically all bowlers before them, flexed their elbows to some extent.

A maximum allowance of 15 degrees for both pace and spin bowlers was agreed.

Because of an elbow deformity, Muralitharan's arm remains bent in delivery and does not straighten.

A television experiment showed that even with his arm encased in a brace, Muralitharan could still spin the ball sharply both ways due to his powerful wrist and flexible right shoulder.

Comparisons with Warne were inevitable 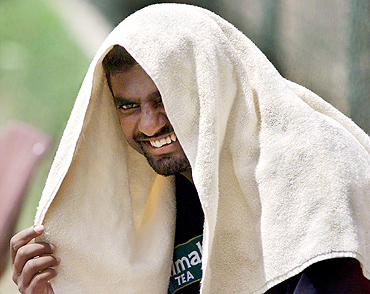 Muralitharan made his debut against Australia in 1992, immediately bringing a cutting edge to a side who abounded in attractive, prolific batsmen but struggled to dismiss sides twice.

He played an essential role in Sri Lanka's exhilarating run to the 1996 One-Day World Cup and enjoyed consistent success in both forms of the game before his body finally rebelled against a relentless workload.

Muralitharan's 16 wickets at the 1999 Oval Test gave him 200 wickets in 42 Tests, the same figure as his great contemporary and rival Shane Warne, who went on to become the first man to amass 700 wickets.

The pair were to dominate world cricket for the best part of a decade and, although the extrovert Australian was to become one of the Wisden almanac's five cricketers of the 20th century, Muralitharan's fiercely devoted supporters believe he was the superior bowler.

A romantic who brought variations to the sport 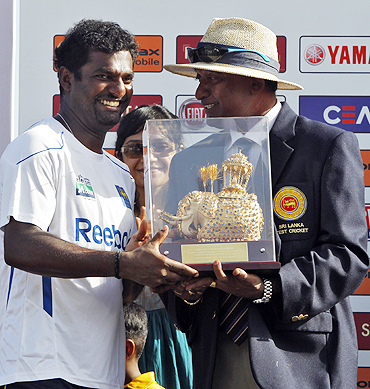 A convincing case can be mounted for either man but the essential difference is style rather than effect.

Warne was a classicist, the best in a continuing line of Australian leg-spinners stretching from Clarrie Grimmett and Bill O'Reilly and including Richie Benaud.

Muralitharan is a romantic, a man who brought something completely new to his sport by bowling fierce off-spin with his wrist rather than the standard gentler version flicked off the index finger.

He became a complete bowler by adding the 'doosra', the delivery which spins away from the right-hander, allied to a top-spinner which both bounced and hurried on to the batsman.

'He has given back so much to our society' 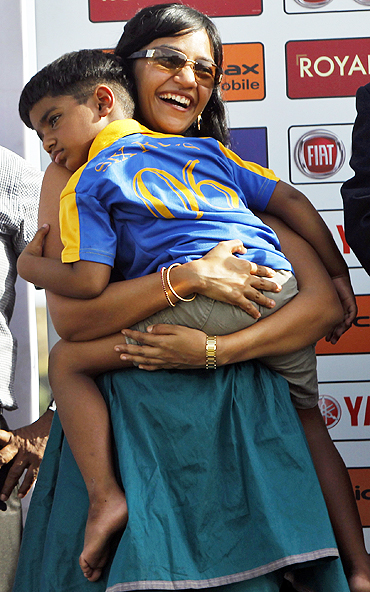 The result is a man who can dip the ball wickedly in the air and whip it both ways off the pitch and who at his peak was close to unplayable.

In a country split by sectarian strife, he has also been an exemplary representative of the Tamil people.

"He has taken much from the game of cricket, but he has given back so much to our society," his current captain Kumar Sangakkara said. "More than any other public figure in Sri Lanka, he stands apart."

© Copyright 2023 Reuters Limited. All rights reserved. Republication or redistribution of Reuters content, including by framing or similar means, is expressly prohibited without the prior written consent of Reuters. Reuters shall not be liable for any errors or delays in the content, or for any actions taken in reliance thereon.
Write a
Comment
Print this
article
ALSO
READ
MOST
RECENT