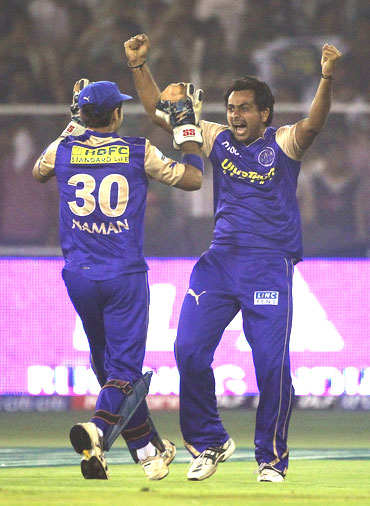 In a match that was billed the clash of two legends, Shane Warne's Rajasthan Royals, struck the first blow, when medium pacer Sumit Narwal sent the dangerous Adam Gilchrist back to the pavilion off the fourth ball of match.

Gilchrist went for a heave, but miscued the shot and was caught by Yusuf Pathan at long-off for just one run. 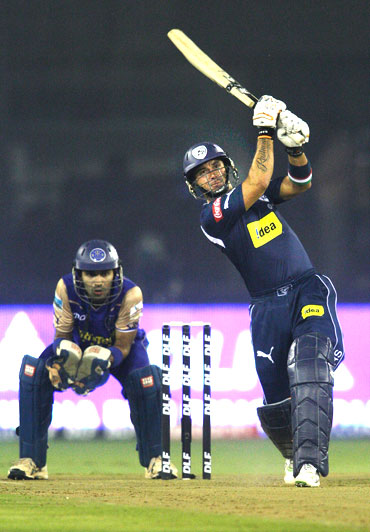 In came Herschelle Gibbs and he looked at his attacking best, scoring a couple of boundaries to ease the pressure a bit.

He first hit two sixes off Abhishek Jhunjhunwala, the first over long-off and the second straight over the bowler's head. Next, he hit Siddharth Trivedi over mid-on for another boundary as Chargers moved on.

But just as Gibbs looked to take the game away from the Royals, a piece of magic from Warne had the South African short of crease. He was stumped by Naman Ojha after a quick fire 25 off 14-balls.

Symonds runs himself out 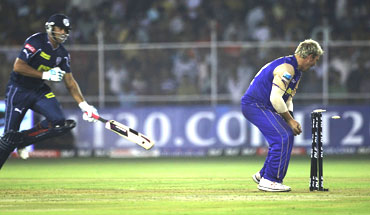 Image: Andrew Symonds is run out

Andrew Symonds announced his arrival with successive boundaries off Narwal, the first towards the backward square-leg boundary and the second smashed over point.

Two balls later, Narwal witnessed a classy cover drive from Symonds's blade racing its way to the fence -- the third boundary off the over.

However, a mix up between Symonds and Rohit Sharma meant that the Australian all-rounder was short of his crease by a good two yards.

Royals were good in the field and hit the stumps directly thrice to sink the innings further. 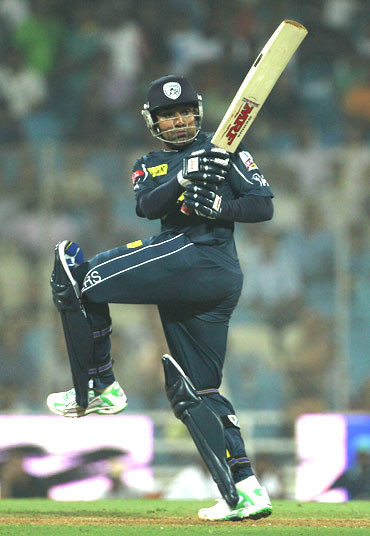 Image: Rohit Sharma hits one to the boundary

Rohit Sharma stood tall among the ruins as he scored a fighting 49 off 35 balls.

Picked in the Twenty20 World Cup squad, he answered his critics with a classical innings. He eased pressure created by the Royals a bit by smashing Trivedi over the midwicket boundary for a maximum and followed it up with a boundary to extra cover.

Narwal was brought back in to the attack, but was hit for two huge sixes.

But Tait came back for the second spell and picked up Rohit, as the Chargers finished with 148-9 in the stipulated 20 overs. 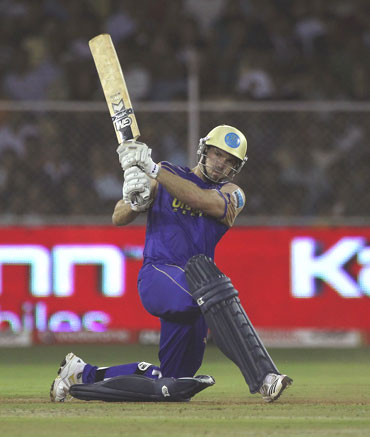 Lumb was the aggressor, hitting couple of boundaries off Vaas in the opening over. He took a special liking to RP Singh as he hit for four consecutive boundaries.

Namna Ojha too joined the party and hit a huge six off Rohit Sharma as Royals reached 51 for no loss in just five overs.

However, the introduction of Pragyan Ojha provided the breakthrough, when he had Naman Ojha stumped for 14 runs. 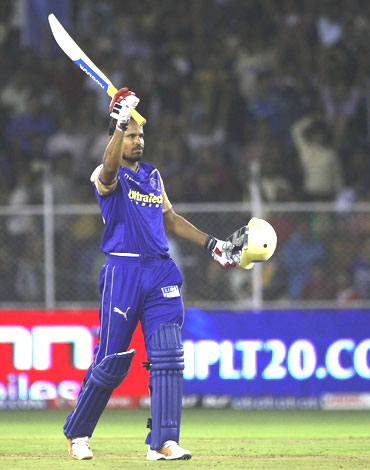 In came Yusuf Pathan and he took the game from Deccan with his big hitting abilities. The champions in the inaugural edition have now won four of their five encounters against the defending champions.

For the team from Hyderabad, it was their second loss in five games.

Yusuf played a starring role with a superlative 34-ball 73, a knock that was inclusive of two hits to the fence and a massive eight over it.

It was the second significant contribution from Yusuf's blade in this tournament, following his 37-ball 100 in Rajasthan's opening loss to the Mumbai Indians.

Yusuf hit the second ball that he faced for a huge six over long-off off Ojha. He continued the onslaught with a couple of boundaries and a six in the left-armer's second over.

Such was the brute force of the Baroda batsman that he hit as many as eight sixes to seal the game.l