Sign in  |  Create a Rediffmail account
Rediff.com  » Sports » My place in Indian team not cemented yet: Kohli

My place in Indian team not cemented yet: Kohli 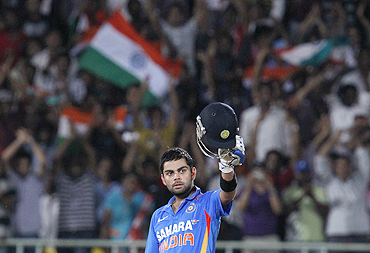 The absence of senior players meant that Virat Kohli got his big chance. And he made sure he grabbed it with both hands.

The Delhi youngster scored a fluent century (118) to set up India's five-wicket victory over Australia in the second One-Day International in Visakhapatnam, on Wednesday.

Kohli was struggling with cramps and had to bat with a runner, but that did not stop him from playing a cracker of an innings under pressure to help India take a 1-0 lead.

The 21-year-old later admitted that despite the splendid innings he is still not sure of a permanent slot in the Indian team.

"I don't believe I have cemented my place in the team. I have to keep performing consistently in the matches to come. Maybe, later in the future I can think if my place is permanent or not," he said after the match.

'Getting a big score gives you a lot of confidence' 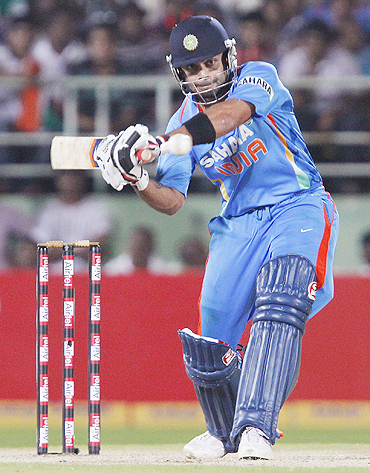 This is Kohli's third ODI century and all have seen India chase down targets, batting second under pressure. His previous two match-winning centuries were 107 not out, against Sri Lanka in Kolkata in 2009, and 102 not out, against Bangladesh in Dhaka in January 2010.

"Obviously, if you are chasing under pressure and the target is huge and if you make a big score it gives you a really good feeling and lot of confidence," he said.

Kohli had to endure a lean spell, as he failed to cross the 50-run mark in his previous seven innings. But the absence of seniors like Sachin Tendulkar, Virender Sehwag and Gautam Gambhir meant that the youngster got one more opportunity to prove his worth. Also, it was important that he performed in the home series against Australia and New Zealand, which also serves as a selection trial for the World Cup next year.

'Just have to get basics right' 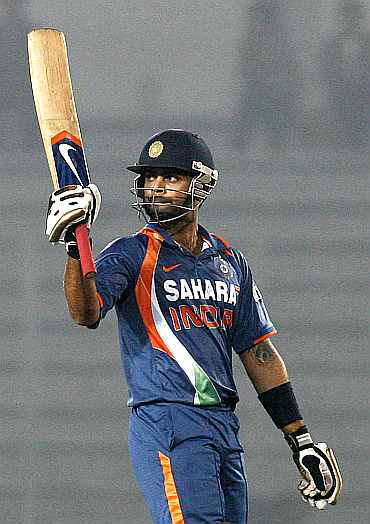 And, not surprisingly, Kohli was relieved to have finally got back among the runs.

"I think the more matches you play at the international level, you tend to learn a lot more. I have tried to learn from my mistakes and capitalize on the opportunities that I got. You tend to fail sometimes as well but it is a part of you going ahead as an international cricketer.

"It all comes back and you just got to keep working hard and do the basics right. You got to prepare yourself really well to give yourself the best chance to perform out there. You can't do that because that is in your hands and I have been trying to do that," he added.

'Having Yuvraj at the other end was helpful' 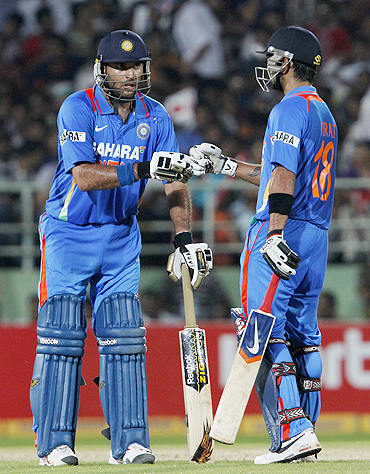 The right-hander also revealed that it was not easy at the start of his innings. India were reduced to 35 for two in the ninth over before Kohli scripted the comeback in the company of Yuvraj Singh (58) and Suresh Raina (71).

"Honestly, I was struggling early on, because, as I said, I hadn't scored on in the last 6-7 matches so I was under a bit of pressure. I was not hitting the gaps early in my innings, but decided to stick there and get myself in. I knew I would be able to capitalize with the dew coming in," he added.

For India, the run chase went according to script as they cruised to an emphatic victory. Kohli gave credit to senior partner Yuvraj for helping him out at the start of his innings.

"I think having someone like Yuvraj at the other end is really helpful. You know he can hit the boundaries anytime and he has a lot of experience of the one-day game. He takes a lot of pressure off the guy batting at the other end, so I had that advantage. It was a good partnership for us and it set the base for us to smash it in the Powerplay and that is what happened."