Failure has become a bad habit for Team India

Putting MS Dhoni on a pedestal after his initial successes was a mistake. Pulling him down -- and blaming him solely -- for the team's recent debacles is an even bigger mistake, argues Bikash Mohapatra

Team India's dream of winning the World T20 is over. For the third time in a year -- including the last World T20 in England and the subsequent Champions Trophy in South Africa -- the Men in Blue failed to make the final stages of an ICC event.

To put it bluntly, it was a series of dismal performances that resulted in an abject overall failure. 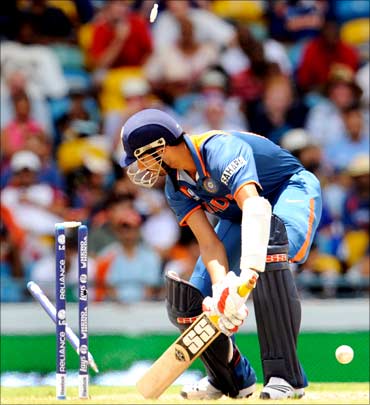 There are two facets to this reality. On the negative side, it demoralises a team (or an individual) which might have put in ample effort in pursuit of a goal, and result in bitter mud-slinging between the players and management, each trying to pin the blame on the other.

On the positive side, it exposes threadbare the lack of effort by a team and accentuates the need for an immediate stock check -- which might manifest itself in a fresh pursuit of the same goal with renewed vigour.

Failure is the pillar of success, goes the adage. But when you apply it to Team India, the adage has a complete transformation with the new one being: Failure is the stepping stone for yet another failure.

In other words, failure has become a bad habit that the team members are either struggling to give up or perhaps aren't even trying to give up.

Ask yourself this question: Why did India fail in the West Indies?

There can be many answers to it. Some justified, others forced. The easiest explanation can be by putting the blame on the Indian Premier League.

The lucrative six-week extravaganza left the Indian team tired, and with the World T20 staring just five days later, there was hardly any time to recuperate.

That the Indian team played non-stop cricket in the lead-up to the IPL, also added to the fatigue factor.

But with cricket becoming more of a business enterprise than a sport in India -- which remains the only cricket-crazy country in the world -- it is hardly surprising.

Despite criticism from some quarters regarding the packed schedule and its repercussions, the team has accepted it as an unavoidable eventuality.

"We have to play throughout the year and don't have much longer breaks," captain Mahendra Singh Dhoni had admitted towards the end of last year, when the lengthy season had just about started.

"A longer calendar is not a problem for us. And two days is the maximum gap that we can have in between games," he went on to add.

Considering this, wouldn't it have been better for the board to rotate the players to keep them fresh for major tournaments like the ongoing one in the Caribbean?

The board realised this eventually, but only after the team had suffered several major failures.

A rotation policy that should have been implemented long back is finally being put into operation, with Suresh Raina leading a young team to Zimbabwe -- with many of the regulars rested.

Hopefully, the board will continue this endeavour in the future too.

The second explanation pertains to the clout of the players.

Why should players like Gautam Gambhir, Harbhajan Singh and Yuvraj Singh have assured berths in the team when they are underperforming in series after series?

There's no questioning their talent, but form is a definite factor  and the players mentioned above have hardly been consistent in recent months.

They might have had a good performance -- for example Harbhajan's effort against South Africa in the Kolkata Test -- but it is simply not enough.

One only needs to look at the broader picture to be assured it is not pretty.

The job of a strike bowler, like Zaheer Khan and Harbhajan, is to take wickets and they are simply not doing that.

Similar is the case with our batsmen as well.

Yet another explanation is the technical inability of our players. 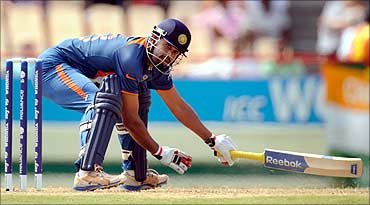 Many of the Indian batsmen palpably struggled against the short ball while almost everybody was guilty of not having patience -- going for the shots from the first ball he faced.

The latter strategy works wonderfully well on the flat tracks of the subcontinent, but once you get sporting wickets the frailties are exposed.

Shouldn't the selectors have been wise enough to choose horses-for-courses rather than going with the predictable bunch?

Lastly, we can go for the most convenient explanation by putting the blame on the captain.

In fact, many are already doing so. MS Dhoni has lost his Midas touch, they say.

But the same critics do forget that the captain is only as good as his team.

And this Indian team might be high on the talent quotient, but is miserable on the application front -- repeated failures in tournaments that matter is ample proof of Team India's lack of application.

How else do you explain the failure of a captain --- who, among others, guided India to emphatic wins in the inaugural World T20 in 2007 and the Commonwealth Bank Series the following year -- to ensure a decent result, let alone a triumph, in international events in the last year or so?

Putting Dhoni on a pedestal after his initial successes was a mistake. Pulling him down -- and blaming him solely -- for the team's recent debacles is an even bigger mistake.

There can be various other explanations for Team India's failure on the international stage. But all will point out the problem (as we have) without offering a solution. That can be provided by the team itself -- with a performance that will be worthy of the hype that cricket generates in a country like ours.