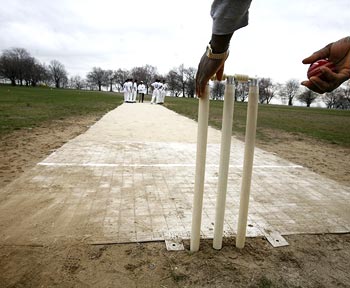 From the country that gave the world the slider and the forkball, cricket's administrators are asking are Americans ready for the doosra and the googly?

The answer may be found this weekend when cricket makes its first real attempt to crack into the United States with two official Twenty20 matches between New Zealand and Sri Lanka at the country's only purpose-built cricket stadium.

"We are very keen, because we want to develop the game, we know that the US is a big market, its got expats who are interested in the game," International Cricket Council (ICC) chief executive Haroon Lorgat said.

"We are keen to get into the schools and it is starting to take root. This format is clearly understandable and can be appreciated by the US market."

At the Lauderhill ground on Thursday, New Zealand and Sri Lankan players practiced while in the stands, workers, staff and media chatted in accents more familiar to grounds in the Caribbean or the subcontinent.

Locals will also be able to see Jamaica playing the United States as part of the weekend, which is the first ticketed event organised by the US Cricket Association (USCA).

The organisation's chief executive Don Lockerbie said they feel it is the perfect time to put on an international Twenty20 match in the US.

"Twenty20 has matured now ... we have a stadium and we have 1000 clubs in the US playing at 500 cricket grounds, that's quite a bit of infrastructure," Lockerbie said.

"It has taken 50-60 years with the advent of Commonwealth immigration to the US to get there.

"On top of that, television is interested. ESPN are broadcasting the games and 88 countries will see cricket played from the United States."

Sri Lanka captain Kumar Sangakkara said the days when Americans would be bored and confused by cricket have long gone and after attending a Florida Marlins baseball game, he thought baseball fans might be impressed by the intense nature of cricket's shortest format.

"The tradition of sport here is towards shorter, more action-packed games and Twenty20 is ideal for that," he said.

"I was at a Marlins baseball game the other day there are some similarities in terms of the skills required but in Twenty20 there is a lot more action happening, less down-time, more varied skills at work.

"For a spectator coming over from baseball to Twenty20, they will see it is action-packed, the ball being hit around, athletic fielding, a lot of courage involved ... a lot of interesting things for ordinary fans."

Lauderhill is expected to be the base for future cricket events in the States, because it is within easy reach of a large Caribbean population and organisers are already looking at ways to bring West Indies game to the venues.

Lockerbie said the model for cricket's attempt to infiltrate American sporting habits has already been laid down by soccer, a game he worked in during the 1990s.

"It's a flat out steal of what soccer has done.

"If you look at Major League Soccer they are averaging 14-15,000 per game, which is commendable after 14 seasons but when Barcelona or Manchester United come out here there is 80,000 people.

"Why is that? Because Americans like to see the best in the world. This our first opportunity to give them that in cricket."

© Copyright 2022 Reuters Limited. All rights reserved. Republication or redistribution of Reuters content, including by framing or similar means, is expressly prohibited without the prior written consent of Reuters. Reuters shall not be liable for any errors or delays in the content, or for any actions taken in reliance thereon.
Related News: United States, Don Lockerbie, Lauderhill, International Cricket Council, Florida Marlins
COMMENT
Print this article