17:10
Punjab 112-3 (14 ovs) vs Kolkata | Scorecard
Morne Morkel returns for his final over.
Morkel starts off with a full delivery as David Miller hits one to point -- no run.
Miller helps himself with a single courtesy off a thickish edge.
Sehwag clips one off his pads for yet another boundary.
Sehwag then gets a outside edge as the ball flies past third man for another boundary.
16:55
Punjab 89-3 (11 ovs) vs Kolkata | Scorecard
Piyush Chawla now introduced into the attack.
Sehwag slog it to long on for a single.
Chawla slows one down for Maxwell as the Australian goes for a sweep, only to hit it to Morne Morkel at deep square leg boundary for 15.
Chawla then keeps it quite conceding only 5 runs from his opening over
16:48
Punjab 86-2 (10 ovs) vs Kolkata | Scorecard
It seems Virender Sehwag is slowly batting himself into form as he helps himself to another boundary.
Sunil Narine, who gave just four runs from his opening over, managed to get a thickish outside edge off Shewag's bat, only to see it hit the boundary boards.
Sehwag then flicks one off his pads for a brace.
The opener then gave the strike to Maxwell, who is happy to play the second fiddle for the moment..
Sehwag meanwhile reached his first half-century of this season with a flick off his pads off Jacques Kallis.
The 35-ball knock consisted of seven boundaries and one six.
16:40
Punjab 53-2 (7 ovs) vs Kolkata | Scorecard
Morkel strikes once again as he removes Wriddhiman Saha for 15. Saha was beaten by delivery that came back a bit, as he chopped one back onto the stumps.
Glen Maxwell gets off the mark as Morkel has been simply unplayable today.
16:30
Punjab 30-1 (3 ovs) vs Kolkata | Scorecard
Umesh Yadav to continue as Sehwag slashes one towards third man for a single.
Saha pulls one, only to get a top edge -- luckily for him it falls in no mans land.
Yadav bowls one down the legside and is called wide.
Sehwag keeps the scoreboard ticking with a single. Saha then sweeps Yadav for a boundary towards fine leg. 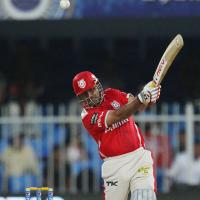 Umesh Yadav replaces Kallis, who bowled that expensive first over. He starts with a leg side delivery to Sehwag, who flicks it through midwicket for a couple. The next ball is again sliding down the pads which Sehwag flicks behind square on the leg side for another four and then takes one from the fourth ball.

Punjab are off to a flying start as they race to 30 for one in three overs, with Sehwag smashing 23 from 11 balls with the help of five fours.

Morne Morkel to bowl the second over. And he makes the first breakthrough for Kolkata with the wicket of Mandeep, who throws his bat at a wide outswinger but only gets an edge and is caught behind for a three-ball duck.

New batsman Wriddhiman Saha is beaten off the fifth ball as Morkel gets the new ball to move away but he hits the last ball through point for another four.

Jacques Kallis to bowl the first over for Kolkata as Virender Sehwag and Mandeep Singh walk out to open the batting for Punjab.

Sehwag starts off in style as he cracks the first ball which is wide through the covers for a four. Two balls later, he flicks it square on the leg side for the same result.

Kallis then attempts a short ball but it slides down the leg side which Sehwag pulls fine on the leg side before he steers the last fine for the fourth boundary of the over.

Punjab off the blocks in smashing fashion as 17 runs come from the first over.

16:08
Kolkata Knight Riders captain Gautam Gambhir has won the toss and elected to bowl against Kings XI Punjab in the 34th match of the Indian Premier League in Cuttack, on Sunday.

Punjab also made a couple of changes with Parvinder Awana and Rishi Dhawan coming for Shivam Sharma and Lakshmipathy Balaji.

Lockdown diaries: The view from my window

Why the Indian media has got a Hindutva edge