Perera despatches medium pacer Gulbis through his favourite midwicket area for his third over as Punjab continue their cruise towards victory.

Laughlin also gets the same treatment as Perera gets another one over midwicket for a boundary to race to 31 from 17 balls.

Bailey finishes off things in some style with back to back boundaries off Gulbis, through midwicket and over the off-side respectively.

Bailey finishes unbeaten on 34 from 27 balls and Perera slammed 35 from 20 balls as Punjab cruised to a convincing five-wicket victory with 14 balls to spare.

Bailey looks in good touch as he flicks Bollinger on the leg side for a four before Perera hits it down the ground for the same result to get 10 runs from the over.

Laughlin has done a good job with the ball. He manages to keep it tight by giving away just seven runs in his third over but Punjab don't need to take any unnecessary risks with 33 needed from six overs for victory.

Bailey keeps the boundaries coming as he hits Hilfenhaus through the off-side to take Punjab to 119 for five in 15 overs.

Medium pacer Evan Gulbis comes into the attack. Maxwell decides to go after him straightaway as he lofts the first ball over mid-off for a boundary. However, he gets revenge three balls later as Maxwell edges one trying for another big hit and is caught behind.

He walks back after a quickfire knock of 43 from 25 balls as Punjab are reduced to 77 for five after 12 overs.

Thisara Perera ensures that the momentum continues despite the wicket of Maxwell. He gets an edge off Boyce for a boundary behind the stumps before he lofts the next ball down the ground for a six.

Bailey hits the last ball through midwicket for another four as 18 runs come from the over to keep things in control as far as Punjab are concerned, with 50 needed from eight overs for victory.

Leg-spinner Cameron Boyce comes into the attack. He makes a tidy start, giving away just five runs in his first over with Maxwell taking five runs from the last ball, wide of the fielder at long-off.

Another change for Hobart as Ben Laughlin comes into the attack. He strikes in his first over with the wicket of Vohra who looks to club it down the ground but offers a simple catch to mid-off to fall for 18 as Punjab slip to 53 for four after eight overs.

Maxwell decides to hit Punjab out of trouble. He plays the inside out shot to perfection against leg-spinner Boyce lofting him all the way over covers for a six. Three balls later he reverse sweeps it over the point region for a four as 13 runs come from the over.

Laughlin bowls another good over, giving away just five, as Punjab reach 71 for four in 10 overs. They need 74 from 10 balls for victory.

Maxwell is looking dangerous yet again, he has blasted 38 from 22 balls, with the help of three fours and two sixes, while George Bailey is on two.

Punjab found themselves in further as David Miller also falls for a duck. The left-hander tries for a big hit down the ground but ends up hitting it straight into the hands of the fielder at mid-off.

Vohra pulls the last ball powerfully over square for a one bounce boundary as Punjab reach 27 for three in four overs.

Glenn Maxwell is off the mark in his trademark fashion. A full delivery from Bollinger is sent crashing back over his head for a six before he takes a single from the next ball.

In the next over, Maxwell plays another cracking shot as he slams Hilfenhaus over mid-on for a boundary. He inside edges the next ball but it goes past the stumps for a boundary fine on the leg side.

10 runs from the over take Punjab to 44 for three in six overs, with 101 runs needed from 14 overs for victory.

Wriddhiman Saha comes in at No. 3 and he smashes a short wide delivery from Ben Hilfenhaus through the off-side for a four.

Vohra then hammers Bollinger through point for another boundary but Punjab suffer another blow in the over.

Saha goes for the big hit but mistimes it and is caught at mid-on after scoring 11.

Doug Bollinger strikes with the first ball of the over with the big wicket of dangerman Virender Sehwag, who offers a simple catch to the fielder on the thirdman fence.

Manan Vora hits a boundary off the last ball as six runs come from the first over.

Hobart need a good finish to take their total around the 150-run mark. However, Anureet bowls a superb final over, giving away just six singles as he resorts to bowling it full and on the stumps. The young pacer finishes with 25 runs from his four-over spell.

Awana to bowl the final over of the innings. He starts with a full toss which Evan Gulbis flicks to deep midwicket for a single. The next ball is again a full toss which Birt smashes through the off-side for a four.

Birt falls off the penultimate delivery as he is caught at 28 from 21 balls.

Hobart struggle to find the boundaries in the last couple of overs to finish on 144 for six in 20 overs.

Patel to bowl his fourth and final over. He continues to be tidy, giving away two runs from the first three balls, before the pressure pays off. Well hits it straight to point and sets off for a single but Birt is not interested and the former is run out by a long way.

Well loses his wicket after a useful innings of 28 from 18 balls, having hit five boundaries.

Patel concedes just two runs in his final over to finish with impressive figures of one for 20 in four overs.

Patel comes back as Punjab look to break the partnership and keep Hobart's scoring rate in check in the last few overs.

Wells cuts the fourth ball through the off-side for a four as Patel drops short to get eight runs to take Hobart to 117 for four in 16 overs.

The floodgates have opened as Well also joins in the party with back to back boundaries off Perera through the off-side. He takes a single from the last ball to raise the 50-run stand for the fifth wicket from just 28 balls.

Hobart have hit 47 runs from the last four overs to advance to 128 for four in 17 overs.

Malik looks to attack the young leggie Karanveer. He comes down the track to the first ball and lofts it over the covers for two runs before playing the late cut to the next for a four. He tries to slog sweep the next but fails to get the desired elevation and is caught at midwicket for 14.

Jonathan Wells gets off the mark with a single and Travis Birt does the same off the next as nine runs come from the over.

Anureet comes back. He drops short as Well rocks back and smashes a short ball square on the off-side for a four before he takes one.

Birt breaks the shackles finally as he goes after leggie Karanveer. The left-hander lofts the first ball back over the bowler's head for a huge six and repeats the shot three balls later for another maximum, slog sweeping it over midwicket. Two runs from the fifth ball followed by a single make it 18 runs from the over as Hobart reach 109 for four in 15 overs.

Leg-spinner Karanveer Singh is brought into the attack. Blizzard decides to immediately target as he carts the fourth ball down the ground for a six and then takes to midwicket to get 11 runs from the over.

Perera comes back and he cripples Hobart with the wicket of Blizzard, who attempts another loft down the ground, but holes out a simple catch to mid-off.

Blizzard is dismissed for 27 from 18 balls as Hobart continue to struggle with the bat.

Another superb over from Perera, as he gives away just a single. His figures read two for six in two overs with Hobart on 72 for three in 12 overs.

Glenn Maxwell comes into the attack as Bailey continues to juggle his bowlers. Shoaib Malik takes a single from the first ball to get off the mark before Blizzard edges the next ball and gets a boundary. Four more singles make it nine runs from the ninth over.

Patel comes back for his second spell, having taken a wicket in his first over before he was taken off. He nearly picks up another wicket as Blizzard chips down the track but is beaten and is lucky that the inside edge saves him as it beats the keeper for a boundary behind the wickets.

After 10 overs, Hobart are 60 for two with Blizzard on 17 from 12 balls and Malik on six from seven balls.

Part-timer Virender Sehwag is introduced as Punjab opt for spin from both ends. A single for each batsman before Dunk comes down and slams it down the ground for a four. Two more singles makes it eight runs from the over.

Bailey continues to ring in the changes as medium pacer Thisara Perara comes into the attack now. Five singles from the first five balls before he strikes with the wicket of Dunk, who attempts another big hit but is caught deep on the off-side.

Dunk walks back for 26 from 25 balls as Hobart are reduced to 43 for two in eight overs.

Punjab make their first bowling change as spin is introduced early. Left-arm spinner Akshar Patel comes on to bowl the fifth over of the innings with Hobart keen to break free after a slow start.

He strikes in his very first over with the wicket of Paine, who is bowled for 11. The right-hander missed the quicker delivery as he went back and it ended up crashing into his stumps.

Aiden Blizzard gets off the mark with a single and Dunk also gets one from the last ball. A good start from Patel as he concedes just two runs, while taking the wicket of Paine to put Punjab on top.

Awana continues and he beats Dunk again as he throws his bat at a wide delivery. He manages to get the next delivery over the off-side for a much-needed boundary for Hobart. Dunk then gives Awana the charge but can't beat the fielder at mid-on.

Awana drops short as Dunk pulls it comfortably through midwicket for a boundary as Hobart look to break free after a slow start.

The left-hander then comes down the track to the pacer and smashes it powerfully over mid-on for the third four of the over. He retains strike with a single from the last ball to make it 13 runs from the over.

At the end of six overs, Hobart are 30 for one with Dunk on 18 from as many balls and Blizzard on one.

Paine gives Anureet the charge and miscues the first ball over the leg side for a couple. The next ball is short and Paine flays it square on the off-side for the first boundary of the match and retain strike yet again with a single from the last ball.

Paine takes a single from the first ball before Dunk is beaten off the next as he tries a big drive outside the off-stump. The left-hander attempts another wild swing over the leg side but fails to make contact.

Awana doing a good job as Dunk can manage only a single from the fifth ball and Paine also picks one from the last ball.

Hobart are off to a slow start as they reach 15 for no loss in four overs.

Anureet Singh to open the bowling for hosts Punjab as Ben Dunk and Tim Paine walk to open the batting for Hobart.

Hobart are five for no loss in two overs. 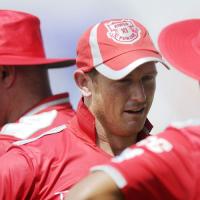 Interestingly, Bailey will come face to face against his home franchise Hobart, whom he captained in the Big Bash League.

'Air India needs to change its attitude towards safety'