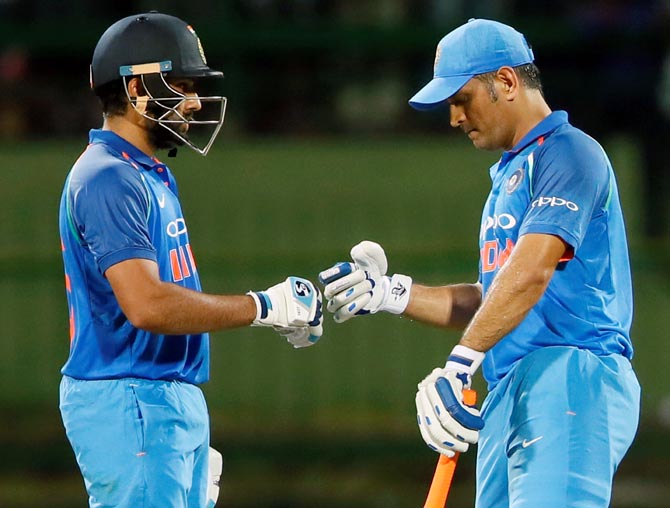 The match has been called off early following the crowd trouble which means India emerge the series winners.

Rohit Sharma slammed an unbeaten century while Mahendra Singh Dhoni provided good support with another half-century to carry India to an easy six-wicket win which helped them seal the five-match ODI series 3-0, in Pallekele, on Sunday.

Rohit stroked 122 from 143 balls, hitting 16 fours and two sixes, while Dhoni made 61 from 81 balls, with the duo putting on an unbroken stand of 149 runs from 173 balls for the fifth wicket to put the innings back on track after a few quick wickets.

India once again stuttered in their run chase, as they did in the previous match, as they slipped to 61 for four before Rohit and Dhoni put them back on track.

India continued their unbeaten run in Sri Lanka, claiming the ODI series 3-0, following their 3-0 whitewash in the Test series.

The Mahindra Thar: Beauty and the beast

As Mahindra readies to unveil its latest version of the Jeep that is so beloved of adventure enthusiasts, the urban crowd as well as the countryside, Rajesh Karkera/Rediff.com traces the vehicle's journey through the decades.

The total coronavirus cases in the country have mounted to 23,29,638, while the death toll climbed to 46,091 with 834 new fatalities being reported in a span of 24 hours, the data updated at 8 am showed.

Share a video of your kid singing Jana Gana Mana

Simply upload the video on Rediff iShare and mail us the link.

We'd asked you, Dear Readers, to send us videos of your school-going kid singing the National Anthem.