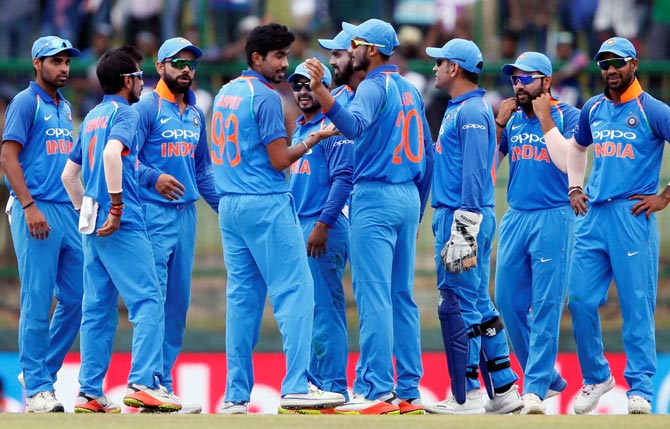 The short ball finally does the trick for Pandya. The struggling Chandimal pulls it straight into the hands of Bumrah at deep square leg to perish after a lacklustre innings of 36 from 71 balls.

Thirimanne takes a single on the leg side before Angelo Mathews clips the last ball to midwicket for one.

Axar keeps it tight as he bowls a maiden over to Mathews as the pressure continues to build.

After three dot balls in a row, Thirimanne takes the risk as he lofts Pandya over midwicket for a four and then takes one.

Mathews struggling to get going as he scores just a single from 10 balls, increasing the pressure on Thirimanne to take a few risks and relieve the pressure.

Thirimanne takes a single off Pandya to bring up his half-century from 69 balls to give the Sri Lankans a lift.

Meanwhile, Pandya bowls a quick bouncer to Mathews, who tries to pull but is beaten down the leg side. He follows it with the knuckle ball, with a huge dip in pace and Mathews manages to defend it before he takes one to thirdman for just his second run from 14 balls.

Sri Lanka have still not got their run rate over the four-run per over mark as they reach 113 for three in 30 overs, with Thirimanne on 51 and Mathews on 2.