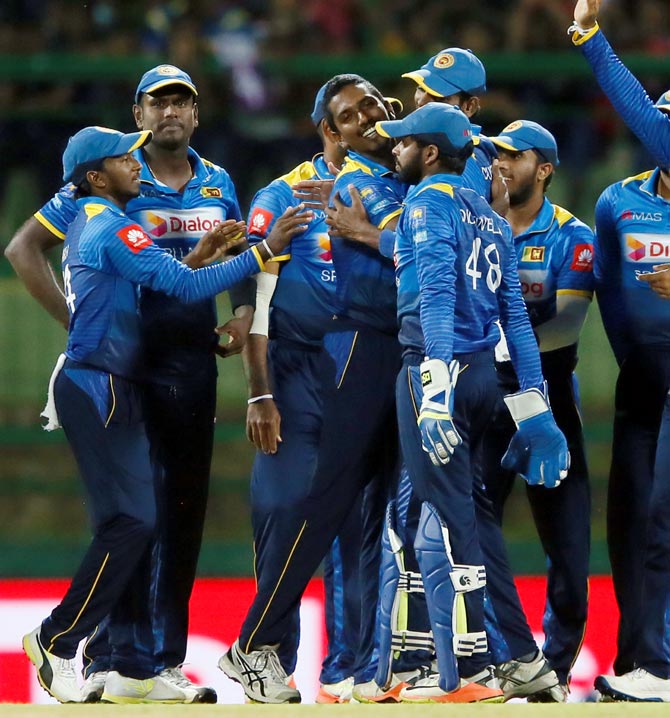 Mathews drops short as Rohit pulls it through square leg for a four and then takes one to thirdman.

Rahul plays a powerful cut shot but Kapugedera comes up with a diving stop to save a boundary at point before the right-hander inside edges the next ball for one.

Rahul living off inside edges as this time gets it off the inside half of the bat against Fernando for a boundary fine on the leg side.

However, he gets the last ball of the middle cutting it past point for a four to take India past the 50-run mark, in the 12th over.

Now Rohit gets an inside edge and it passes close to the stumps and goes to the wicketkeeper on the bounce.

Rohit has had enough of the defending as he comes down the track and lofts the medium pacer over the covers for a four.

The two Indian batsmen have a huge misunderstanding as they try to steal a quick single before hesitating but Rohit makes his crease safely in the end.

Mystery spinner Akila Dananjaya comes into the attack. He strikes in his very first over with the wicket of Rahul, who pulls a short ball but straight into the hands of the fielder at deep midwicket to perish for 17.

Rodriguez whipped Everton in front from the edge of the box, and Michael Keane and Calvert-Lewin ensured it was two wins from two in the Premier League so far this season.

Gareth Bale returns to his former club on a one-year loan deal, with British media reporting that Tottenham Hotspur will pay 20 million pounds ($25.8 million) in wages and fees for the 31-year-old Wales forward.

Rohit on what went wrong for Mumbai Indians against CSK

Mumbai Indians skipper Rohit Sharma on Saturday blamed his batsmen for the five-wicket loss to Chennai Super Kings in the IPL opener, saying they wasted a good start by throwing their wickets away.

Images from the IPL 2020 opener between Mumbai Indians and Chennai Super Kings, in Abu Dhabi, on Saturday.