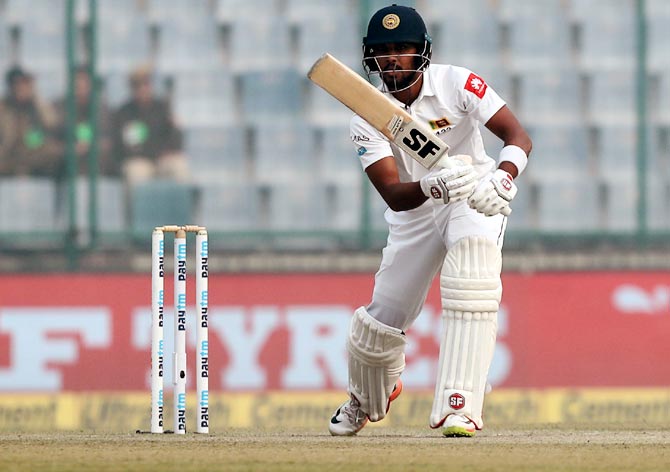 Ishant peppering Mathews with bouncers as the first one goes down the leg side before he pulls one for a four with Murali Vijay on the fine leg fence unable to pick the ball.

The third ball is fuller as Mathews taps it on the leg side for one.

Shami comes back from the other end. Mathews does well to pick another single to keep the scoreboard ticking along.

Shami pitches it right up as Chandimal comes forward and punches it down the ground past mid-off for a four.

Shami responds with a bouncer from round the wicket before Chandimal looks to glance a short ball fine as it falls nearly short of Rahane at leg gully.

Pacers from both ends as Ishant continues. He starts with a short ball down the leg side as Mathews goes for the pull but is beaten. He taps the next ball on the off-side and Chandimal does the same off the next ball.

A slightly short ball is tucked to square leg for one and Chandimal gets a glove trying to fend a short ball as he manages to beat the fielder at leg gully for one.

Ashwin finally comes into the attack with half an hour to go for lunch as he replaces Shami.

Chandimal takes a single to bring up the 100-run stand for the fourth wicket, the first century stand for the visitors in the series.

Surprisingly, Ashwin has only bowled just 10 overs as compared to Jadeja's 21 despite his impressive bowling in the previous Test when he claimed eight wickets in total.

Shami changes ends as he takes over from Ishant. He continues to try the short ball as Mathews pulls it to fine leg for one and Chandimal clips it on the leg side for another single.

Mathews plays another pull for one before Chandimal gets a thick outside edge which beats the fielder at point for a four.

That brings up Chandimal's third half-century in the series, following two fifties in the previous Test at Nagpur.