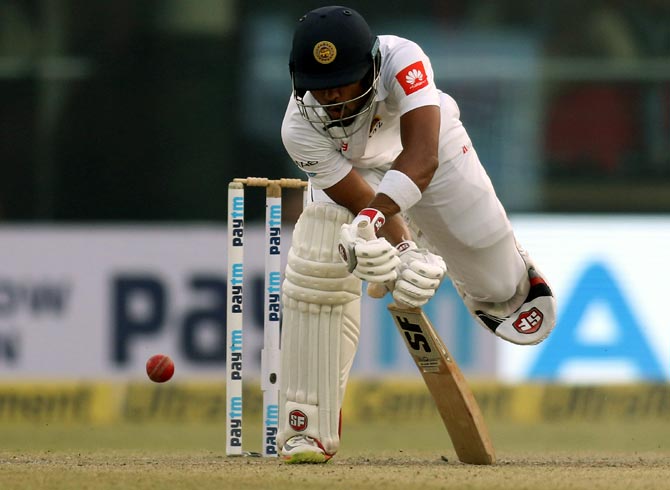 Welcome to the coverage of Day 3 of the third and final Test between India and Sri Lanka in New Delhi on Monday.

After a drama-filled second day, Sri Lanka face another tough task on the third day as they battle to save the third Test.

India dominated Day 2 as captain Virat Kohli smashed a career-best 243, his second successive double hundred, before a blanket of smog prompted him to declare on 536 for seven.

The visitors then reduced Sri Lanka to 131-3 on the second day, trailing by 405 runs.

Angelo Mathews capitalised on an early reprieve to score 57 not out and skipper Dinesh Chandimal was on 25 with Sri Lanka still 405 behind on a hazy day in the Indian capital.

Behind in the match and struggling in the conditions, several Sri Lankan players returned from the lunch break sporting facemasks as the seasonal haze affecting the region thickened over the Feroz Shah Kotla Stadium.

The smog eventually held up play twice and 22 minutes was lost in total as Lahiru Gamage and his pace colleague Suranga Lakmal both left the field during the second session as they found it difficult to breathe.

Umpires Nigel Llong and Joel Wilson were discussing the air quality with the tourists when Kohli signalled his team in.

Until then, the stadium's near-capacity crowd was treated to some elegant shot-making by Kohli, who hit 25 crisp boundaries in his master class spread over seven-and-half hours.

The 29-year-old became the first international captain to score six double centuries, all of them coming in the last 17 months.

Kohli's tally is now the highest for any captain, surpassing Brian Lara's five double tons. Check out the complete details
« Back to LIVE