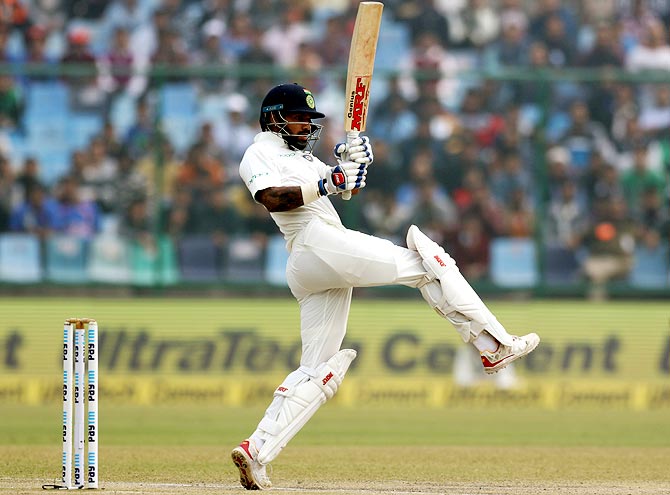 Following Pujara's dismissal, Dhawan seems to have taken the onus on himself to keep the runs coming.

Dhawan comes down the track and drives Lakmal through the covers for a couple and then two balls later hammers one through the same region for a boundary.

The left-hander then goes for the cut shot but is beaten and then clips the pacer through midwicket for another couple.

Dhawan has cut loose as he hammers a short wide delivery past point for another boundary to get 12 runs from the over.

Captain Virat Kohli gets off the mark with a single off de Silva on the off-side followed by three more singles in the over.

Finally, left-arm chinaman spinner Lakshan Sandakan is called into the attack, to bowl the 34th over.

Dhawan clips the second ball on the leg side for a single to bring up his fifty from 83 balls.

A single to Kohli before Dhawan smashes Sandakan back over his head for a straight six to complete 2000 Test runs in grand style and keeps strike with one from the last ball.