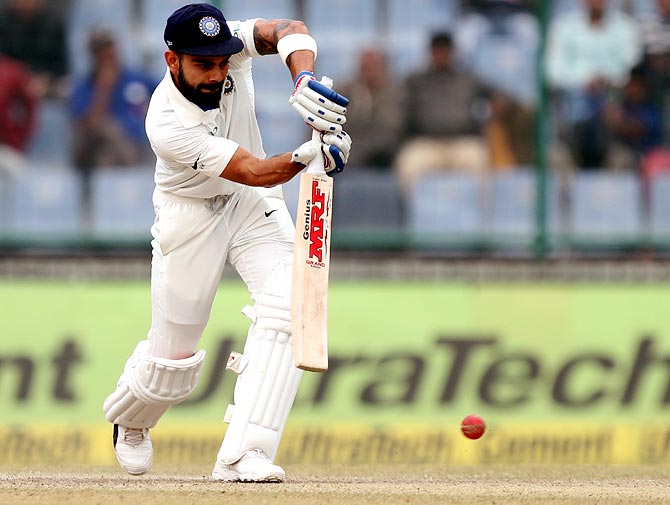 Rohit pulls Lakmal uppishly on the leg side as Sadeera Samawickrama dives full length to his right and almost pulls off a blinder. He gets one hand to it and is unable to hold on but ends up saving the boundary.

The 12th man Vijay Shankar has run out with a message for captain Virat Kohli. He then goes and speaks to coach Ravi Shastri in the dressing room, who discusses with batting coach Sanjay Bangar and vice-captain Ajinkay Rahane. Shankar is sent back out again with another message on possibly how many overs India would like to bat.

Sri Lanka looking to cut down the boundary as Kohli and Rohit pick the singles and twos to keep the runs coming.

Rohit has a close shave as he taps it to the covers and sets off for a run but is sent back, who slips but manages to make his crease.

Another message passed on as Kohli and Rohit continue to bat.

Kohli finds the gap to perfection as he crashes a wide delivery from Lakmal through the point region for a four to inch closer to another fifty.

He smashes the next ball down the ground but gets just a single before Rohit pulls a short ball for another four.

Kohli, who made 243 runs in the first innings, take his tally to 290 runs in the match -- the most by an Indian captain in a Test match.

Three singles off Sandakan's next over helps Kohli bring up yet another half-century, from 55 balls.