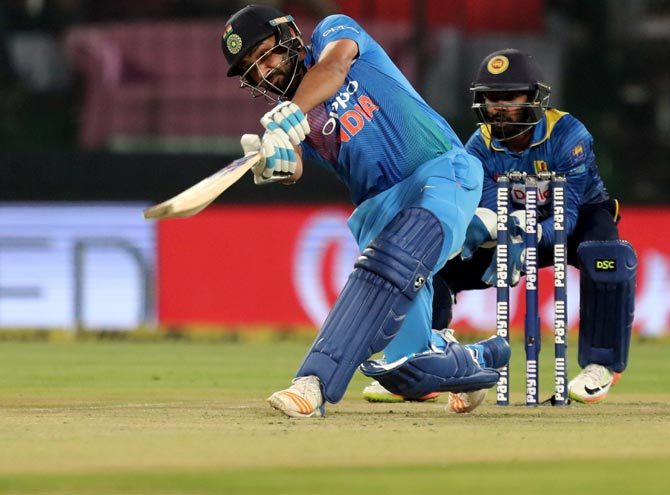 Left-arm spinner Chaturanga de Silva comes into the attack with Sri Lanka desperate for a breakthrough to stop India's charge.

Rohit welcomes him by smashing the first ball over the off-side field for a four. The next ball is steered past point where the fielder misfields to give away another boundary.

Rahul then uses his feet and smashes the spinner for another big six straight down the ground as the over goes for 16 runs.

Medium pacer Asila Gunaratne comes into the attack and he comes under some heavy attack from Rohit.

Rahul takes a single from the second ball before Rohit hits the next four balls for boundaries.

He heaves the third ball over midwicket for a six to race to his fifty from just 23 balls in grand style. The next ball is again a slower ball as Rohit hammers the length ball over the same region for the same result.

The fifth ball is full and wide as Rahul pierces the gap behind point for a four and then plays a cracking cover drive off the last ball for another four as Gunaratne is hit for 21 in his first over.