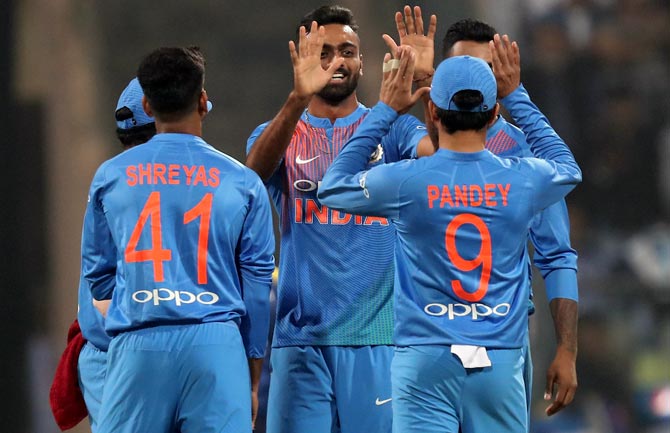 Left-arm chinaman spinner Kuldeep Yadav comes into the attack. Gunaratne is beaten first up as the bowler appeals for catch behind but the umpire is not interested.

He gets an edge off the next ball trying to play the cut shot but Dhoni drops a sharp chance as the ball bounces more than expected and they pick a single.

Samarawickrama then heaves the spinner on the leg side and barely manages the clear the fielder at midwicket and gets a boundary and Gunaratne sweeps the next for one to the fielder in the deep.

Samarawickrama gets an inside edge off the last ball for a single on the off-side.

Pandya bowls another quick bouncer to Samarawickrama who takes a couple of steps down before he ducks under it.

The next ball is full as Samarawickrama gives Pandya the charge and tries to loft it down the ground but ends up holing out to Karthik at mid-off.

Samarawickrama walks back for 21 as Sri Lanka are reduced to 56 for four in the ninth over.

New batsman Danushka Gunathilaka goes after a wide away going delivery and nearly gets an edge before he defends the last ball.