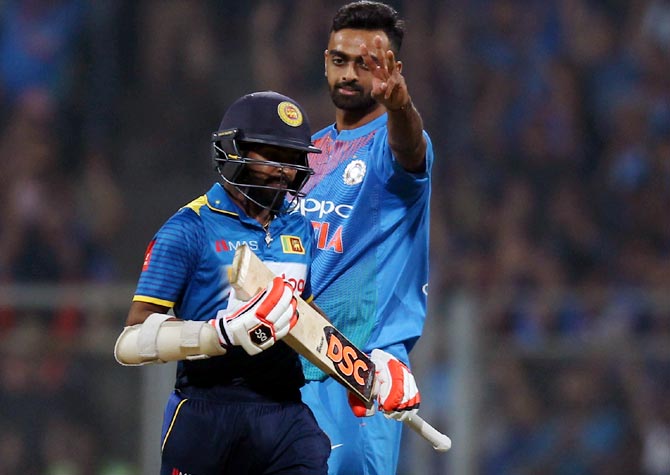 Washington continues as Samarawickrama takes a single from the first ball. The off-spinner drops short and Gunaratne has no problems pulling it through midwicket for a four.

Samarawickrama gets a lifeline as he edges the last ball but it hits Dhoni's gloves and goes past the fielder at first slip.

Mohammed Siraj into the attack in place of Unadkat, who bowled an excellent first spell of two for seven in two overs.

Samarawickrama steers the first ball square but Manish Pandey comes up with a full length diving stop at point to save some runs.

Gunaratne then skips down the track and blasts it through the covers for a four before he tries to guide a short ball over the keeper but fails to make connection.

Samarawickrama plays a delightful cover drive, timing it perfection for the second four of the over, which goes for 11 runs.

Hardik Pandya comes into the attack as he replaces Washington, who bowled an impressive first spell of one for 18 in three overs.

He starts with a leg side wide to Gunaratne, who clips the second ball on the leg side for one.

He then bowls a quick short ball as Samarawickrama goes for the pull but is hit on the helmet as it beats Dhoni and goes for a four. He then tries another wild shot on the leg side but gets an inside edge for two runs before he flashes at a wide ball but is beaten.