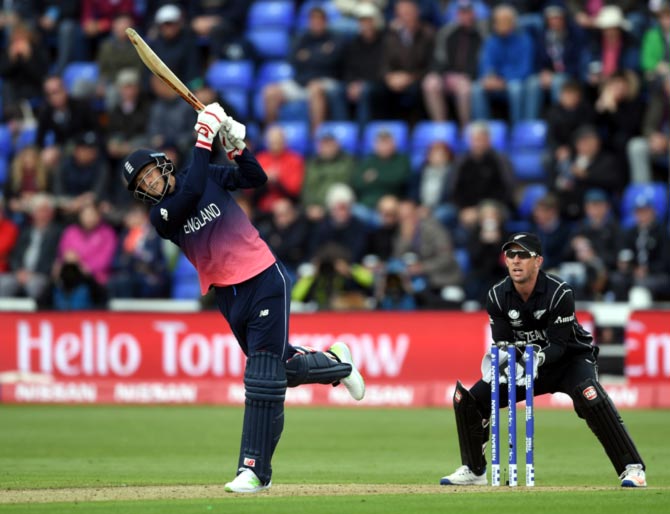 England 189-4 (34 ovs)  vs New Zealand | Scorecard
Anderson back in the attack and is welcomed by a six straight over mid-off.
He then gets a single down to mid-wicket.
Frustration shows as Root (64) goes for the big heave but he drags the ball on to his stumps and that is a wicket for Anderson.
Root's dismissal brings Buttler to the crease.
England now have two big hitters at the crease.
Buttler gets off the mark with a run down to fine leg.
Stokes play a dot ball to end the over.
Southee continues, and that is a wide down the leg side.
A slower delivery and pulled to backward square leg for a single.
The rain is beginning to trickle down here.
Stokes hits the ball to backward point where Broom does a good job to stop it, Root runs off but is back in time at the non-strikers' end.
Stokes plays a short to deep backward point and gets two runs for the effort.
Southee bowls a widish yorker that Stokes digs out but gets one run down to third man.
Neesham continues and Stokes gets a boundary off the second ball. It's a crisp boundary through the covers.
He then gets a run to deep square leg.
After playing a dot ball, Root then gets a run down to fine leg.
Stokes then plays an uppish shot to third man and runs two to end the over.
Tim Southee brought back into the attack and almost gets the breakthrough.
Root runs down the track, has no control over the pull shot but thankfully for him the ball falls just short of Neesham at mid-wicket.
« Back to LIVE