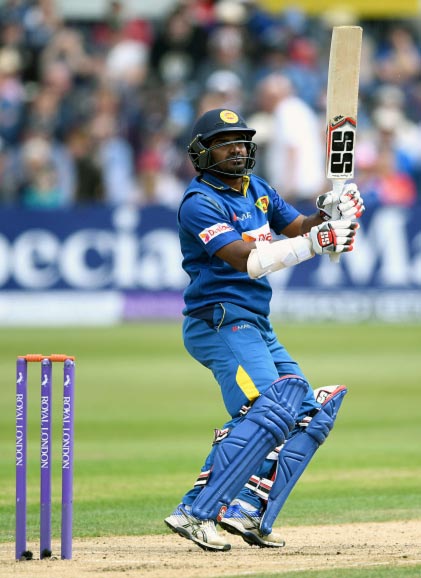 India bring back their pacers, hoping to pick up another wicket or two. Umesh starts his new spell with a tidy over as he concedes just five runs. Mathews played a nice drive through point but Dhawan did well on the ropes to stop the boundary.

Bumrah comes back and he will be looking for the change in pace to trouble the batsmen. Bumrah bowls a quiet over, giving away just five runs as India look to build the pressure by drying up the boundaries.

Perera has a close shave as he tries to steal a quick single but Mathews at the striker's end is not interested. However, Sri Lanka are lucky that the fielder on the leg side missed the direct hit.

Mathews swats the next ball over midwicket for a four and then chips the next to the same region, but a bit squarer for a single.

Umesh bowls a short ball on the pads as Perera helps it over short fine leg for a four to raise the 50-run stand from just 42 balls.

Mathews looks to loft Umesh down the ground but is beaten off the last ball but SL still manage to get 10 from the over.

Perera has stroked his way to 37 from as many balls, while Mathews has raced to 22 from 21 balls.

Rodriguez whipped Everton in front from the edge of the box, and Michael Keane and Calvert-Lewin ensured it was two wins from two in the Premier League so far this season.

Gareth Bale returns to his former club on a one-year loan deal, with British media reporting that Tottenham Hotspur will pay 20 million pounds ($25.8 million) in wages and fees for the 31-year-old Wales forward.

Rohit on what went wrong for Mumbai Indians against CSK

Mumbai Indians skipper Rohit Sharma on Saturday blamed his batsmen for the five-wicket loss to Chennai Super Kings in the IPL opener, saying they wasted a good start by throwing their wickets away.

Images from the IPL 2020 opener between Mumbai Indians and Chennai Super Kings, in Abu Dhabi, on Saturday.