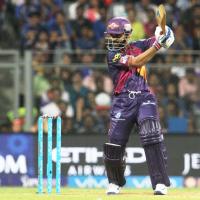 18:32   Rahane gets win with a six!
Pune 78-1 (12 ovs) vs Punjab 73 (15.5 ovs) | Scorecard
Maxwell continues.
Smith takes a quick run and then Rahane plays a lovely cut shot for a couple.
The batsmen take a run each and with two runs needed Rahane comes down the wicket and sends the ball over deep mid-wicket boundary for a six!
What a way to get the win and march into the knockouts.
Punjab join Gujarat Lions, Royal Challengers Bangalore and Delhi Daredevils out of tournament.
Tewatia continues.
Smith nudges the ball down to fine leg for quick couple as Mohit Sharma cuts it at the boundary.
Smith and Rahane pushing the ball to long on and the Smith gets one with a shot at cover.
A rare shout as Rahane plays the ball onto his pads, the umpire laughs at the suggestion of an LBW.
Maxwell brings himself into the attack.
The batsmen are easing their way to the target here.
Read more >

18:18   Tripathi out for 28
Pune 58-1 (9 ovs) vs Punjab 73 (15.5 ovs) | Scorecard
Tewatia continues.
What a miss! Guptill drops Rahane at deep mid-wicket. Rahane and Smith cross.
Both batsmen happy to nudge the ball around.
3 runs off the over and the time-out is called.
Axar continues and the batsmen are content with just taking the singles and twos. There is no need to be rash or go for the big shots. Practical batting by both batsmen as Pune complete the 50-run mark.
Left arm spinner Swapnil Singh comes into the attack.
The batsmen take easy 6 runs off the over.
Read more > 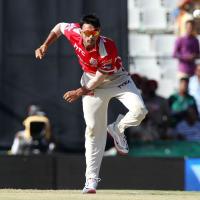 18:10   Tripathi out for 28
Pune 43-1 (6 ovs) vs Punjab 73 (15.5 ovs) | Scorecard
Axar Patel is welcomed into the attack with a boundary through cover by Rahane. Lovely shot that.
Axar strikes!
Tripathi goes for a sweep, comes too across the stumps, misses the ball completely and is bowled out for 28 off 20 deliveries.
Steven Smith comes into the attack and gets off the mark with a single through mid-wicket.
Seven runs off the over and after Powerplay overs Pune are 43 for 1.
Spinner Tewatia comes into the attack and after 2 dots balls is launched for a six over deep mid-wicket! What a shot!
Read more > 18:02   Good start by Pune
Pune 30-0 (4 ovs) vs Punjab 73 (15.5 ovs) | Scorecard
Ishant Sharma comes into the attack and Tripathi sends him for a four down to third man.
He then tucks the ball down fine leg for another 4, the batsmen run another 3 runs and Pune have raced to 30 for no loss after 4 overs.
Sandeep Sharma not doing Punjab any favours by starting the over with a wide.
Tripathi goes down the pitch and slaps the ball down to deep mid-wicket for a four.
Rahane gets a run down to deep square leg for a single.
Read more >

17:51   Punjab set Pune 74 for a win
Pune 9-0 (2 ovs) vs Punjab 73 (15.5 ovs) | Scorecard
Mohit Sharma is given the ball.
Rahane sends the ball down to third man for a run.
Tripathi gets a four down to extra cover. Nice crisp shot that!
Tripathi plays a slog shot down to fine leg and gets a single for his effort.
That is 9 for no loss after 2.
Sandeep Sharma to start proceedings for Punjab as Ajinkya Rahane and Rahul Tripathi open the batting for Pune.
Rahane opens his account with two runs to the cover area.
He gets another run off the last ball. 3 runs off that over.
Read more > 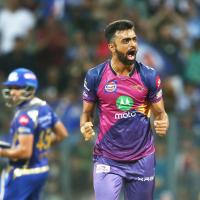 17:35   Pune bowlers dismiss Punjab inside 16 overs
Punjab 73 (15.5 ovs) vs Pune | Scorecard
From 32 for 5 , Axar Patel and Saha do well to take Punjab to 50 for 5 before the strategic timeout is called and Pune make another breakthrough.
Saha is taken out by Daniel Christian and his little fighting innings is ended for 13.
Punjab just cannot get going and are dealing in just singles and twos.
The frustration is growing and Axar Patel is tempted to drive, he has a go and that is a very simple dismissal.
Unadkat then comes back in the attack and has Swapnil Singh caught behind for 10.
Adam Zampa then takes the final two wickets (Ishant Sharma gone for 1 and Mohit Sharma gone for 6) as Punjab are dismissed for a paltry 73 in 15.5 overs.
A shameful show of batting by Punjab this.
Read more > 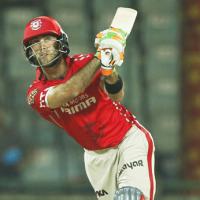 17:19   Unadkat to the fore
Pune strike early! First ball, first strike. Jaideep Unadkat dismisses Guptill for a duck.
Shaun Marsh is unaffected by the early loss and cracks 2 boundaries in consecutive overs.
Saha gets a life when he dropped by MS Dhoni in the third over.
The next ball is plundered for a six.
Shardul Thakur then strikes in the 4th over. He gets the wicket of Shaun Marsh. Marsh offers Smith a simple catch at mid-off.
Eoin Morgan comes to crease and starts with a cracking cut short for 4.
He doesn't last long at the crease as he is run out for 4 in the very next over. A good direct hit by Unadkat means curtains for Morgan.
Rahul Tewatia comes to the crease and starts with a four.
But he too doesn't last long. An diving catch by Unadkat sends Tewatia back into the hut for 4.
Punjab in trouble as none of the batsmen are able to stay at the crease.
Captain Maxwell fails to fire in the must-win encounter and is dismnissed for a duck.
Half the side is back in the hut even before the end of Powerplay overs. It's 32 for 5 after 6 overs.
Read more > 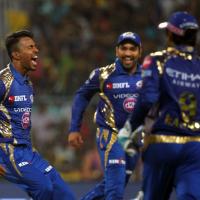 Hardik to bowl the final over with Umesh on strike, who gets a single from the first ball.

Boult pulls a slower ball to deep midwicket for a couple before Hardik bowls a wide yorker and the right-hander is beaten as he makes room but can't reach it.

Hardik follows it up with a quick bouncer which beats Boult again who has a wild swing and misses again.

Boult has no clue against Hardik, who bowls another slower ball to fox the batsman followed by a single off the last ball.