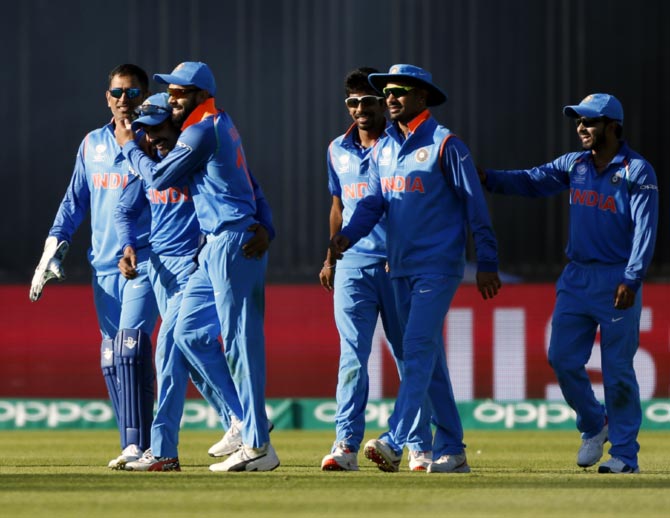 New Zealand 61-6 (8 ovs) vs India 67-5 (8 ovs) | Scorecard
India beat New Zealand by 6 runs to win the third and final T20I and pocket the series 2-1.
India's bowlers once again played an important role to keep the runs in check and claim wickets in quick succession and keep the pressure on the opposition batsmen.
Last over and Pandya comes into the attack. Santner sneaks a single for a bye off  the first ball.
Grandhomme plays the ball straight to Pandya who drops the catch but there is no run there.
Pandya goes down in pain but is back on his feet.
Grandhomme smashes Pandya's off cutter down to the mid-on boundary for a six.
Pandya follows that up with a wide.
Grandhomme gets a single and Santner is on strike to the delight of fans.
10 needed off 2 balls.
Santner plays the ball straight down the ground for a couple.
Santner plays the final ball for a single down to third man.
« Back to LIVE

BJP plans mega exercise to reach out to farmers

Union Agriculture Minister Narendra Singh Tomar has held a series of meetings with MPs and Union ministers from Punjab and Haryana and surrounding states, and virtual interactions with state agricultural ministers of all BJP-led National...

It is learnt that the Indian delegation insisted on a time-bound implementation of the agreement finalised during the extensive talks between External Affairs Minister S Jaishankar and his Chinese counterpart Wang Yi in Moscow on...

Indian Air Force's Rafale fighter jet operating over a forward airbase in Ladakh near Line of Actual Control with China.

"The conduct of opposition leaders in the Upper House of Parliament on Sunday was shameful, irresponsible and utter disrespect to parliamentary rules and dignity," Union Minister Ravi Shankar Prasad said.

Goyal said, there is no proposal under consideration on withdrawal of MFN status to China.