23:51   Rajasthan vs Delhi match to resume at 2355 IST
Well, the groundstaff have swung back into action and the umpires have conducted an inspection before deciding that play will resume at 2355 hours IST.

The latest is that Delhi will be chasing 71 runs from six overs for victory.

Read more >
23:30
The rain continues to play spoilsport in Jaipur as we inch closer to the cut-off time of around 12am IST for a five-over game.

Unless the weather improves and groundstaff can start working on the covers in the next 10 minutes, it looks difficult that the match can get underway.

22:50   Rain stops play in Jaipur; Royals 153-5
The rain is refusing to relent as it continues to pour down in Jaipur. But it has gone a little bit lighter in the last few minutes and the latest from the SMS stadium is that there will be an inspection at 11pm IST.

But it looks unlikely that the ground could be ready so quickly and the delay looks to continue for a long time.

Read more >
22:49   Umpires to conduct inspection at 1040pm IST
The rain has got slightly lighter and we could have an inspection in the next 15 minutes, if conditions stay the same. The rain continues to belt down in Jaipur and it looks unlikely that it could relent anytime soon, so the resumption looks a long time away.

We are set for a long delay here. 10.25 hours IST is the point when we start losing overs and it is not long for that now.

Check the picture on the left to see how the spectators had to use the chairs to protect themselves from the heavy downpour. 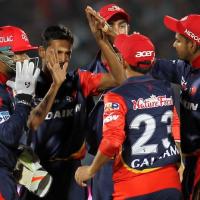 A good tight over from Shami as he gives away just four singles with Delhi building up some pressure with some tidy overs in the middle.

Tewatia comes back as Buttler picks up a single from the first ball before Rahul Tripathi sweeps it behind square for two runs and gets the next ball again on the leg side for two runs.

Tripathi tries the sweep yet again but can't beat the fielder at short fine before he sweeps the next one over the same fielder but just for one.

A wide to Buttler, who punches the last ball wide of long-on for a couple as Tewatia finishes his spell with figures of 29 runs from four overs.

Pacer Morris comes back as Tripathi swings the first ball over midwicket and just about clears Boult at deep midwicket, who does well to take the catch but can't hold his balance as he falls over the ropes to give away a six.

Two balls later, Buttler hits one high on the leg side as Maxwell makes a good effort wide of long-on as he leaps high but is unable to take the catch or stop the ball from going over the ropes, for the second six of the over.

Morris then drops short as Buttler slashes it over point for a four as Morris goes for 18 runs, in the 17th over.

Buttler goes hard after Shami, smashing the fast bowler straight down over long-off for a six.

But Shami makes a good comeback as he follows it up with two dot balls before the slower ball beats Buttler all ends up, who attempts the paddle sweep but misses and is bowled for 29.

Shami greets new batsman Krishnappa Gowtham with a bouncer which is ruled a wide for height. The right-hander flicks the next ball behind square for two runs.

And soon it starts to rain heavily at the Sawai Mansingh stadium in Jaipur forcing the players and umpires to rush off the field.

Jos Buttler comes out to the middle with Rajasthan needing another good stand to boost their chances of posting a competitive total.

Buttler wasting no time as he paddle sweeps leg-spinner Tewatia fine on the leg side for two runs. The field is moved as Gambhir puts in a man at leg slip but Buttler reverse sweeps the next ball past the vacant slip region for a four.

In the next over, Rahane makes his intentions clear as he gives fast bowler Shami the charge and whacks him through the covers for a four. The next ball is pulled over midwicket for another boundary as Rahane takes his score into the 40s. His positive also ensured that his team didn't lose the momentum after the dismissal of Samson.

Nadeem strikes again in his next over, this time with the wicket of captain Rahane.

He looks to hit the left-arm spinner through the leg side but gets a leading edge and is caught on the off-side.

Rahane walks back after a good innings of 45 from 40 balls as Rajasthan are reduced to 113 for four in 14 overs. 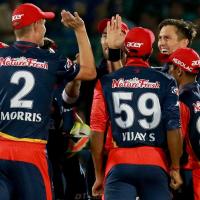 Nadeem makes up for his poor first couple of overs with the wicket of the dangerous Samson.

The right-hander attempts a rash slog sweep but is bowled off an inside edge which goes off his pads onto the stumps.

Samson walks back after a quickfire 37 from 22 balls as Rajasthan lose their third wicket. 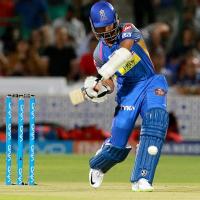 Samson looking in good touch as he flicks a full delivery from Morris through the leg side for three runs.

Five singles from the rest of the over takes Rajasthan past the 50-run mark, in the sixth over.

Pacer Mohammed Shami comes into the attack. He starts with a short ball which Rahane pulls for a four. He survives a leg before shout later in the over as Shami goes for seven in his first over.

Leg-spinner Rahul Tewatia comes into the attack. He makes a tidy start as he concedes just four singles in his first over.

Nadeem comes back, replacing Shami, who bowled a good first over. Nadeem starts with a poor delivery, a half-tracker, which is pulled high over midwicket for a six by Samson.

The next ball is a touch wide and Samson steers it past the wicketkeeper fine on the off-side for a four.

A single off the next ball sees Samson race to 30 from 15 balls.

Three more singles before Rahane turns Nadeem on the leg side for a couple to make it 15 from the over.

Tewatia continues as Samson picks up a single to raise the 50-run stand for the third wicket to continue Rajasthan's fine recovery.

The leggie drops one short as Rahane pulls it for a boundary to take Rajasthan to 84 for two in 10 overs.

Captain Rahane has looked solid on 29 from 27 balls, while Samson has stroked his way to 33 from 18 balls. 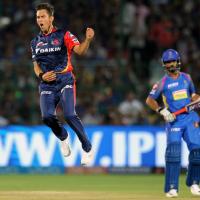 Boult beats Stokes all ends up as he gets one to leave the left-hander two balls in a row. But Stokes makes a good comeback as he smashes the third ball past mid-off for a cracking boundary and then takes one.

Chris Morris comes into the attack. Stokes steers the second ball square on the off-side for two runs before he pulls the fourth ball powerfully over square leg for a six and then takes one.

Rahane comes down the track to the last ball and has a big swing but fails to make contact.

Delhi persist with Boult as he continues, to bowl his third over on the trot and the move pays off. He strikes with the key wicket of Stokes, who again hangs his bat but the ball moves away enough to take edge and wicketkeeper Rishabh Pant takes a good sharp diving to his left.

Stokes walks back for 16 to leave Rajasthan in early trouble on 28 for two in the fifth over.

Sanju Samson starts off confidently as he drives the second ball he faces, from Boult, through the off-side for a four.

The next ball is short and this time Samson pulls it over midwicket for a six and Rahane pulls the last ball square for another boundary to get 15 runs from the over. Ajinkya Rahane and D'Arcy Short are the two opening batsmen for Rajasthan, who will be desperate to start their home matches with a win.

Trent Boult to bowl the first over as Rahane turns the second ball on the leg side for two runs before he gets an inside edge for three runs, off the fifth ball and then takes a single from the last ball.

Left-arm spinner Shahbaz Nadeem comes into the attack. Short smashes the first ball through the covers for a four but he perishes off the very next ball.

Short had hit the ball towards midwicket as Rahane pushed him for a second but the Australian hesitated at the end of the first run and he had to pay a price for it as Vijay Shankar got him run out with a direct hit from the deep.

Ben Stokes promoted to No. 3 and he gets off the mark with a single and Rahane does the same off the fifth ball.

Another single to Stokes makes it eight from the second over. 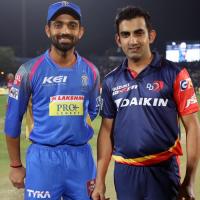 19:45   Delhi win toss, elect to bowl vs Rajasthan
Delhi Daredevils captain Gautam Gambhir has won the toss and elected to bowl against Rajasthan Royals, in the sixth match of the IPL, in Jaipur on Wednesday.

Delhi have made a couple of changes with Glenn Maxwell coming into the team in place of Dan Christian. Maxwell had missed the first match as he had gone back to Australia to attend the wedding of his best friend Aaron Finch, who also missed the opening game for Kings XI Punjab. 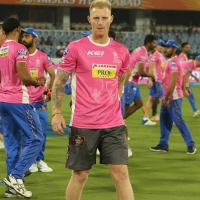 19:24   IPL updates: Rajasthan eye winning return at home
Rajasthan Royals will need to regroup quickly after a heavy loss when they face Delhi Daredevils in what will be their first IPL home game in five years at the Sawai Mansingh Stadium, in Jaipur, on Wednesday.

Both Royals and Daredevils were outplayed in their opening games and will be itching to bounce back.

Royals, on the other hand, could never cope with the bowling might of Sunrisers Hyderabad and went down by nine wickets, in Hyderabad, on Monday.

It was a rather forgettable opening for the hosts who are making a comeback in the tournament after serving a two-year suspension.

Skipper Anjikya Rahane too would like to forget the outing where he failed with the bat, missed a sitter in slips and also gambled with batting only to see a complete rout of his team.

The batting order in absence of Steve Smith looked brittle, the overseas players including Ben Stokes looked shaky against the spinners and the bowlers lost heart once the batsmen could put only 125 on the board.

Barring a 49 by Sanju Samson, none of other the batsmen showed any confidence nor they could build any partnerships.

They face Daredevils who are still in shock and feel that despite doing all good, it was just Rahul's lightning fifty which took the match away from them. The skipper Gautam Gambhir looked good and determined during his 55 and Rishabh Pant and Morris too contributed.

They also have a good and experienced bowling side with Boult, Mohammad Shami, Morris and Amit Mishra in the forefront.