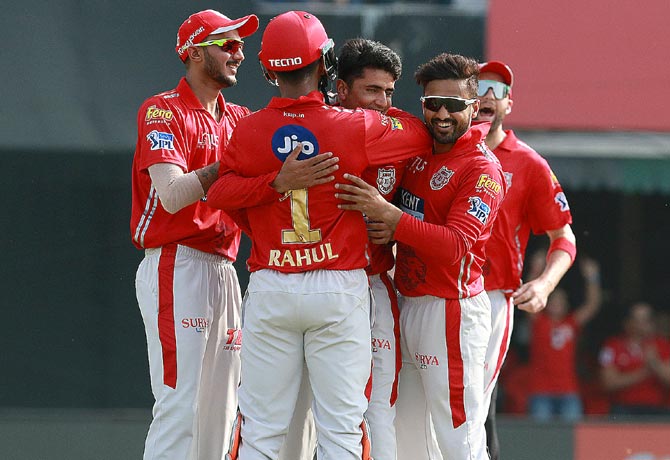 RCB 88-4 (12 ovs) vs KXIP 155 (19.2 ovs) | Scorecard
Ashwin continues.
After bowling a dot, Ashwin finally gets his man. De Kock tries to come down and is bowled all ends up.
Next ball, Sarfaraz Khan tries to play a cute shot, only holes out to first slip as RCB are now four wickets down and Ashwin is on a hat-trick.
Mandeep is the new batsman, fuller ball and he starts with a defensive shot.
He then gets off the mark with a single.
De Villiers on strike and dot ball to end the over.
Axar continues and the batsmen here are picking the gaps easily and De Kock brings up the 50 partnership and reverse sweeps the bowler for a four.
De Kock then goes after a big one, gets a top edge but the ball lands in no man's land.
8 runs come off the over.
Ashwin comes back into the attack and De Kock is treating the bowler with disdain.
He first hits him for a beautiful six over the bowler and follows that up with a four on the leg side.
12 runs come off the over.
Axar comes back into the attack.
Dot ball first up and second ball, he gets De Kock right on the knee roll. Review taken by Punjab but they have lost it as it was hitting outside off.
De Villiers then cuts it but can't penetrate the in-field.
Next ball, he plays a lovely cover drive for a couple.
Just three come off that 9th over.
« Back to LIVE