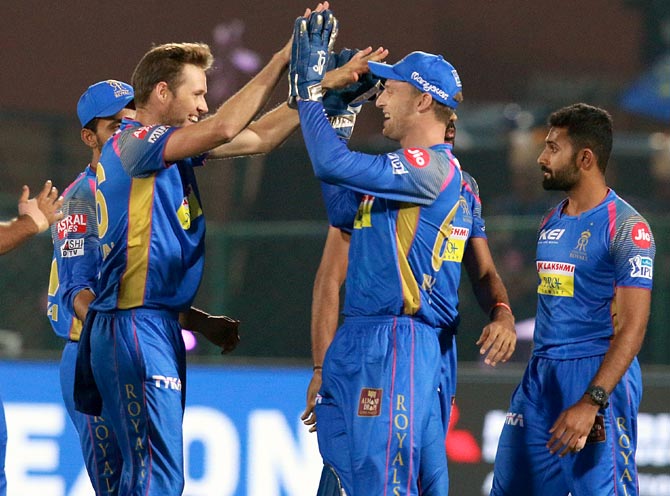 CSK 131-2 (12 ovs) vs RR | Scorecard
Leggie Gopal comes back into the attack, Raina just cuts it behind point to start the over with a four.
A dot ball later, Raina goes on one knee and slaps it over covers for another well-timed boundary.
Ohh! He just misses the edge.
A wide ball later, Raina is finally dismissed!
He pulls a slog sweep but is caught by Gowtham, a good diving catch to send back Raina for a well-made 46.
Laughlin comes back and Watson starts the over with a single.
Raina then hammers the ball over extra cover for a four.
Laughlin then bowls a wide.
Raina then plays the ball to fine leg for a single.
Short ball and Watson pulls it over deep square leg for a flat six!
Watson and Raina then take a single each to end the over with 15 runs coming off it.
Unadkat brought back into the attack.
He starts well, giving just two runs but Raina then just hammers the bowler for consecutive boundaries to bring up a 50-run partnership and the team 100.
Gowtham continues and Raina gets a life as Gowtham makes a hash of a throw to run out the batsman the non-strikers' end.
Watson gets to his half-century after a huge six over Ben Stokes at long-on.
He then cuts it past cover for a four. He then cleared the fence again, swinging his arms and hammering it over mid-wicket for a six.
The batsmen then take a couple of singles as 19 runs come off the over.
Leggie Shreyas Gopal comes into the attack and the batsmen are happy to just taking the singles and twos as four runs come off the over.
« Back to LIVE