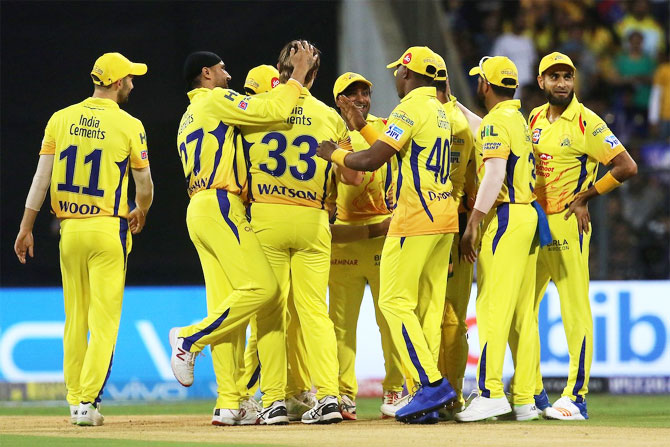 DD 198-5 (20 ovs) vs CSK 211-4 (20 ovs) | Scorecard
Chennai Super Kings beat Delhi Daredevils by 13 runs despite a fightback by Pant and Shankar late in the innings.
28 needed off the last over.
Ngidi continues and starts with a wide.
Tewatia then slaps the ball to mid-off for a single.
Shankar gets to his fifty off another six to the on-side.
Ngidi bowls another wide and now 19 needed off 4 balls.
shankar plays the ball just over the in-field and scampers for a couple.
Nice ball, Shankar can only get an inside edge and a single.
Tewatia then gets a single.
Shankar gets a single to mid-wicket off the last ball of the over.
Bravo continues and Shankar gets a single straight down the ground.
Tewatia then gets a single to long-on.
Bravo then bowls a wide.
Slower, full ball and Shankar just launches it over the bowlers head for a six.
Short ball and Shankar plays it over deep mid for a six!
A dot next ball.
Shankar then slaps the last ball of the over over long-on for another maximum!
21 come off the 19th over.
Ngidi comes back into the attack. Shankar gets a single off the first ball.
Pant then slaps the slower ball to long-on for a four.
A dot ball later, Pant tries to go after the bowling, extra bounce, doesn't control the shot and he is caught by Jadeja in the deep. He is gone for 79.
Tewatia is the new man in.
Shankar plays a wild shot, Dhoni can't reach it and tweaks his back in the process of trying to catch the ball while backpedalling.
Tewatia swings and misses.
« Back to LIVE