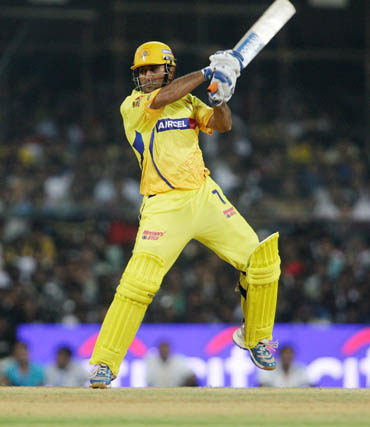 CSK 170-3 (17 ovs) vs DD | Scorecard
Boult comes into the attack and Dhoni pulls it over square for a flat six!
He then smashes the ball over long-on for another six.
Short ball and Dhoni plays it down to deep square leg for a four.
Dhoni then gets a single to backward square leg.
Rayudu then gets to the pitch of the ball and gets a four to long-on.
Dot to end the over as 21 come off it.
Mishra continues and Dhoni gets a couple to fine leg, he scampers through for that second.
Dhoni then gets a single to long-on.
Rayudu then gets a single to deep mid-wicket.
Dhoni then picks out the googly, dances down the wicket and smashes it over long-off for a six.
Dot to end the over.
Avesh comes into the attack Dhoni gets a single.
Rayudu then gets a single.
Dhoni then scampers through for another single.
Rayudu then gets a couple.
A short ball and Rayudu miscurs the shot, ball falls in no man's land and he gets a single.
A dot to end the over as 6 runs come off the over.
Dhoni comes in to bat and gets off the mark with a single as 8 runs and a wicket come in the over.
Mishra comes back into the attack and Rayudu starts with a boundary to fine leg.
Rayudu and Watson then take 3 singles and Watson is back on strike.
Mishra drops the quicker one and Watson tries to go after him but holes out to the man at long-off. The batsman walks back for a well-made 78 off 40 balls.
« Back to LIVE