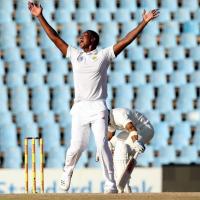 South Africa fast bowler Lungi Ngidi claimed six wickets on debut to send India crashing to a series defeat, on Day 5 of the second Test in Pretoria on Wednesday.

India's batsmen flopped again as they were bowled out for a lowly 151 in 50.2 overs, to lose by 135 runs as South Africa sealed the three-match series 2-0.

Ngidi destroyed the Indian batting line-up in the second innings as he finished with splendid figures of six for 39, while Kagiso Rabada picked up three for 47.

Rohit Sharma was the top-scorer for India with 47, while Mohammed Shami hit a quickfire 28 but the rest of the batsmen disappointed.

India, who resumed the final day on 35 for three, never really challenged with the bat on the final day. Cheteshwar Pujara was dismissed for 19, when he was run out for the second time in the match.

Parthiv also fell for the same score, brilliantly caught on the fine leg fence by Morne Morkel off Rabada.

Rabada tries a few bouncers to Ishant from round the wicket who defends the first one and ducks under one.

He then keeps out a full delivery before slapping the last ball through the covers for a four.

Ngidi bowls a short wide ball as Bumrah has a wild swing but misses. He chips the next ball straight to the fielder on the off-side as India are bowled out for a lowly 151 to lose the match by 151 runs.

South Africa also clinch the series 2-0 with a match to go.

Shami throwing his bat at everything as Ngidi is called back into the attack. He gets an inside edge off the first ball for a boundary behind the stumps.

He tries to loft the next ball down the ground but holes out to Morkel at mid-off as Ngidi completes his five wicket haul on debut.

Shami had fun with the bat, smashing 28 from 24 balls, hitting five boundaries.

Jasprit Bumrah gets off the mark with two runs past the slips before he goes for a weird pull shot but makes no connection.

Rabada tries a short ball which goes down the leg side and Rohit helps it along the way, pulling it fine on the leg side for a four.

He tries the shot again off the next ball but this time it goes off the gloves, this time finer on the leg side for another four.

Rohit was not in control of the shot and was lucky that the ball didn't lob through to the wicketkeeper.

That four brought up the 50-run stand for the eighth wicket from just 49 balls.

Rohit (43) goes for another pull and is beaten before he hits the next one straight to Hashim Amla at square leg stationed closer to the batsman, who does well to gets his hands to a tough catch flying over his head but is unable to hold on.

Rohit makes room and drives Morkel through the covers for two runs before he tries to pull and is beaten. He pulls the next ball behind square on the leg side for a single

Rabada sends Rohit back to the dressing room in the final over of the session. He again goes for the pull and is again not in control as AB de Villiers dives forward and takes a superb catch inches from the ground.

Rohit played a fluent innings of 47, to save India the blushes as he put on 54 runs for the eighth wicket with Shami.

The lunch interval has been pushed back by 15 minutes after the fall of the eighth wicket.

Ishant Sharma watchfully defends the remaining four deliveries of the over.

Rohit goes after spinner Maharaj as he slog sweeps the spinner for a four through midwicket. Two balls later he comes down and loft him straight down the ground for a six and then keeps strike with a single from the last ball.

A single each to the two batsmen off Ngidi's next over, who continues to bowl with good pace.

Shami swings Maharaj on the leg side for a four before he steers the next ball through the vacant thirdman region for three runs.

Rohit makes the mistake of taking two byes off the fifth ball after Maharaj had slipped it down the leg side and wicketkeeper de Kock fails to collect it and he is unable to get the single from the last ball.

Ngidi is unlucky as Shami throws his bat a wide one and gets the edge but it flies over the fielder at gully and goes for a four. He clips the last ball to deep square leg for two runs to race to 20 from just 15 balls.

It will pace from both ends as Morne Morkel replaces Maharaj. He bowls one short which keeps low but Rohit manages to keep it out before taking a single on the off-side.

Rabada takes over from Ngidi. Shami playing a good hand with the bat, hitting a few shots and getting good results. He smashes a wide delivery from Rabada through the off-side for a four to take his score to 24 from 18 balls.

Ngidi on fire at the moment! He continue his wicket ways as he gets Ashwin caught behind for three with India slipping to 87 for seven.

A dream debut Ngidi, who is one wicket away from claiming five wickets in an innings in his first ever Test match.

Mohammed Shami plays an awkward pulls shot but can't make proper connection for two runs before he slams the next past point for a four.
Read more > 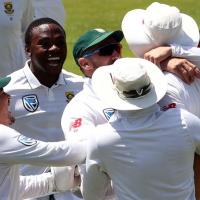 14:38   Pandya fails with the bat, India continue to slip

Rohit looking to counter-attack as he lofts Philander over the fielder at midwicket for a four before he takes a single off the fourth ball.

Rohit flirts with a wide delivery from Rabada but is beaten by some movement before he steers the fourth ball past the gully fielder for a four and keeps strike with a single from the last ball.

A surprise move as South Africa bring in spinner Keshav Maharaj into the attack. The left-arm spinner looking to bowl on a defensive line as he bowls it outside the leg-stump and Rohit can only defend.

Change from the other end as Lungi Ngidi replaces Rabada with South Africa opting to keep the pacers going from one end.

Pandya gets a thick outside edge but it flies through the gap past the slips for two runs and he then clips the fourth ball through the leg side for another couple before taking a single.

Maharaj bowls another quiet over as Pandya picks a single and Rohit takes two runs on the off-side.

Pandya loses patience and gifts his wicket away with a poor shot. He looks to play the ramp shot but the steep bounce sees him only getting the edge and wicketkeeper de Kock takes a superb one-handed high catch to his right.

Ngidi has taken three as India slip to 83 for six, still needing another 204 runs for victory.

Ngidi nearly claims another wicket as Ravichandran Ashwin gets a quick bouncer on his body which he avoids as wicketkeeper de Kock appeals for the catch.

The South Africans take the DRS after the umpire rules it not out but the replays show that the ball has not touched the gloves and only flicked the sleeves of the tshirt on its way to the keeper. 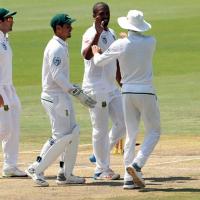 Parthiv throws his bat at a wide one from Rabada but is beaten before he drives the fourth ball through the covers for a four.

In the next over, Philander gets Rohit to edge one but it goes wide of AB at second slip and goes for a four.

Parthiv looking good as he punches a full delivery from Rabada straight down the ground past mid-on for a four.

Two balls later, the bowler gets revenge with the wicket of Parthiv for 19. The left-hander took on the short ball from Rabada but the tall Morne Morkel came up with a stunning diving catch to cripple India further.

India slip to 65 for five, with another 222 needed for victory.

Two brilliant pieces of fielding were responsible for those two wickets more than the pitch or bowling.

South Africa's fielding proving to be world class yet again, while India's was below par as they dropped quite a few catches in this game. 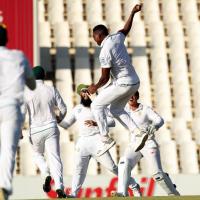 Pujara is run out for the second time in the match!

This is a needless risk taken by Pujara as he goes for a risky third run but the flat throw from the thirdman boundary is right next to the stumps and wicketkeeper Quinton de Kock whips off the bails with Pujara struggling to make the crease.

It was debutant Lungi Ngidi, who dived to stop the ball from going over the ropes and AB de Villiers sent in a quick flat throw from the boundary right next to the stumps as Pujara falls short despite the dive.

India not helping their cause by giving away a wicket to run out as they slip to 49 for four, still needing another 238 runs for victory.

The third umpire takes a long time to judge on the run out call but eventually rules it out.

Parthiv picks another single on the off-side before Rohit gets one which kicks off from length and he does well to keep it down.

Kagiso Rabada starts with the ball for South Africa on Day 5 and facing him is Cheteshwar Pujara, who will be the key to India's chances in this Test match.

He defends the first ball and offers no shot to the next which comes in quite a bit, passing close the stumps. Pujara then taps the third ball on the off-side and takes a quick single to bring Parthiv on strike, who was hit on the ribs by a quick short ball from Lungi Ngidi.

As expected Rabada starts off with a short ball which Parthiv defends and ducks under the next one before he steers the last ball past point for two runs.

Vernon Philander from the other end. The first ball is short and wide as Pujara steers it behind square on the off-side, beating the gully fielder for a four. Two balls later, he drives it into the covers but is unable to get proper timing and gets just a single. The last ball stays low as Parthiv is hit on the pads and he gets a leg bye.

The first ball of Rabada's next over stays low and Parthiv does well to adjust and keep it out.

Parthiv gets a single off the fifth ball as Philander hits the stumps and gives away an overthrow. 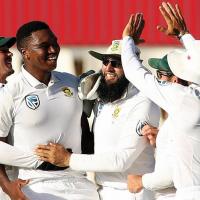 Welcome to the coverage of the fifth and final day of the second Test between South Africa and India in Pretoria on Wednesday.

India will need to pull off something special to clinch an unlikely victory on Day 5, with the visitors needing another 252 runs on an uneven pitch to win the Test and keep the three-match series alive.

On Day 4, a fiery spell from pacer Lungi Ngidi left India reeling on 35 for three in 23 overs, after being set a challenging 287 for victory.

At stumps on Day 4, Pujara was unbeaten on 11, while Parthiv was not out on five.

Kagiso Rabada dismissed Murali Vijay for nine after he was bowled off an inside edge.

Debutant Ngidi left the visitors in a mess with the wickets of KL Rahul (4) and Virat Kohli (5) to reduce India to 26 for three.