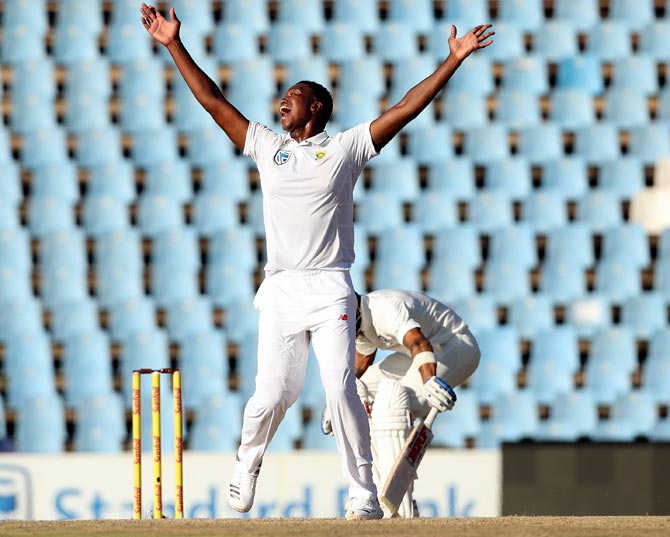 South Africa fast bowler Lungi Ngidi claimed six wickets on debut to send India crashing to a series defeat, on Day 5 of the second Test in Pretoria on Wednesday.

India's batsmen flopped again as they were bowled out for a lowly 151 in 50.2 overs, to lose by 135 runs as South Africa sealed the three-match series 2-0.

Ngidi destroyed the Indian batting line-up in the second innings as he finished with splendid figures of six for 39, while Kagiso Rabada picked up three for 47.

Rohit Sharma was the top-scorer for India with 47, while Mohammed Shami hit a quickfire 28 but the rest of the batsmen disappointed.

India, who resumed the final day on 35 for three, never really challenged with the bat on the final day. Cheteshwar Pujara was dismissed for 19, when he was run out for the second time in the match.

Parthiv also fell for the same score, brilliantly caught on the fine leg fence by Morne Morkel off Rabada.

Ngidi ran through the lower order picking up four of the last five wickets to fall to lift South Africa to an easy victory.
« Back to LIVE

India 'B' played out a 2-2 draw against Azerbaijan in the 9th round of the open section, while India 'A' and 'C' teams registered identical 3-1 wins in the 44th Chess Olympiad in Mamallapuram, Chennai, on Sunday.