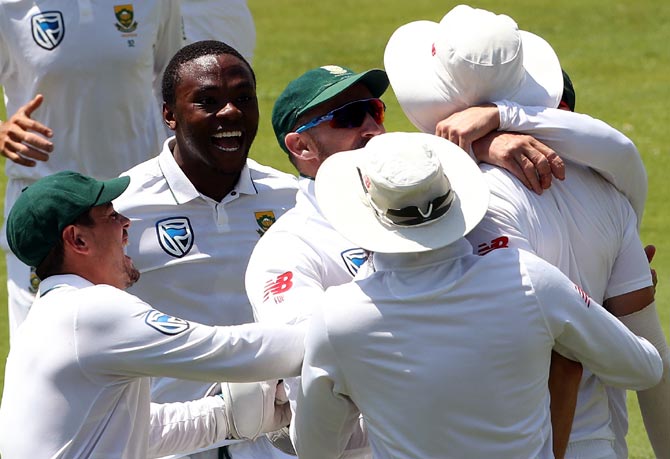 Rohit looking to counter-attack as he lofts Philander over the fielder at midwicket for a four before he takes a single off the fourth ball.

Rohit flirts with a wide delivery from Rabada but is beaten by some movement before he steers the fourth ball past the gully fielder for a four and keeps strike with a single from the last ball.

A surprise move as South Africa bring in spinner Keshav Maharaj into the attack. The left-arm spinner looking to bowl on a defensive line as he bowls it outside the leg-stump and Rohit can only defend.

Change from the other end as Lungi Ngidi replaces Rabada with South Africa opting to keep the pacers going from one end.

Pandya gets a thick outside edge but it flies through the gap past the slips for two runs and he then clips the fourth ball through the leg side for another couple before taking a single.

Maharaj bowls another quiet over as Pandya picks a single and Rohit takes two runs on the off-side.

Pandya loses patience and gifts his wicket away with a poor shot. He looks to play the ramp shot but the steep bounce sees him only getting the edge and wicketkeeper de Kock takes a superb one-handed high catch to his right.

Ngidi has taken three as India slip to 83 for six, still needing another 204 runs for victory.

Ngidi nearly claims another wicket as Ravichandran Ashwin gets a quick bouncer on his body which he avoids as wicketkeeper de Kock appeals for the catch.

The South Africans take the DRS after the umpire rules it not out but the replays show that the ball has not touched the gloves and only flicked the sleeves of the tshirt on its way to the keeper.

Sharath Kamal and Gnanasekaran Sathiyan was outsmarted by familiar foes Paul Drinkhall and Liam Pitchford of England in the men's doubles final at the Commonwealth Games in Birmingham on Sunday.

Double Olympic medallist P V Sindhu stayed on course for an elusive gold medal, while Laskhya Sen entered his maiden final at the Commonwealth Games in Birmingham on Sunday.