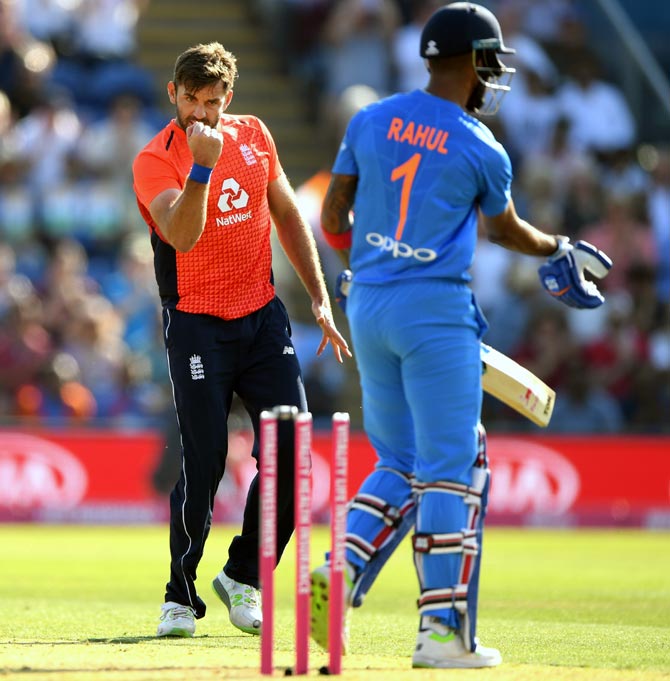 India 52-3 (10 ovs) vs England | Scorecard
Chris Jordan comes into the attack as Raina shuffles and clips it behind square for a four followed by a single.
Virat Kohli taps it on the off-side and calls Raina for a quick single as he has to dive to make his crease.
Raina then turns the fifth ball on the leg side for a couple to get eight runs from the over.
India are 31 for three in six overs, their lowest Powerplay score in the last two years.
Plunkett beats Kohli outside the off-stump who tries the slash but misses before takes one to thirdman.'
Plunkett tries the short ball as Raina pulls it over mid-on for a four as India are keen to inch their way back into the contest with some boundaries.
A tidy over form Jordan as he gives away five singles with England keeping India in control.
Leg-spinner Adil Rashid comes into the attack. Kohli slaps a wide delivery through the covers for a couple before he flicks the fourth ball on the leg side for two more runs.
Another couple for Kohli on the leg side off the leggie before he keeps strike with a single from the last ball.
Plunkett, who bowled a good first spell, comes back to replace Jordan. He starts with two dot balls to Kohli, followed by four singles off the next four balls.
England have done well to restrict India to 52 for three in 10 overs with Kohli on 14 from 19 balls and Raina on 16 from 12 balls.
« Back to LIVE

The quota winners at the 2023 World Championship will not be eligible to participate in the continental qualifiers unless they participate in a different style.

Rahul made 51 not out and Yadav, the world's second-ranked Twenty20 batsman, remained unbeaten on 50 off 33 balls as India romped home with 20 balls to spare.

Amid Rajasthan crisis Gehlot in Delhi to meet Sonia, says issues will be resolved soon

Rajasthan Chief Minister Ashok Gehlot will meet the Congress high command in New Delhi on Wednesday amid suspense over whether he will file nomination for the post of party president, sources in Jaipur said.

IMAGES from the opening T20I played between India and South Africa in Thiruvananthapuram on Wednesday.

India captain Rohit Sharma is happy that his team got to 'learn a lot' in their eight-wicket victory over South Africa in a low-scoring chase on a tricky pitch in the first T20 International.