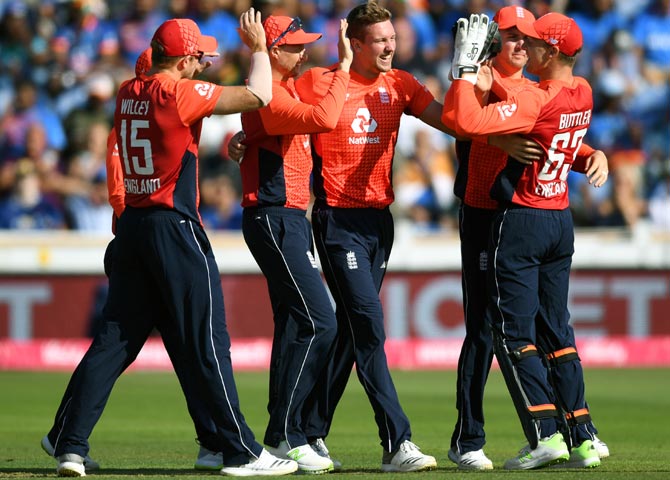 India 23-3 (5 ovs) vs England | Scorecard
The in-form KL Rahul gets off the mark with a single courtesy of an inside edge before Dhawan is beaten trying to flick but the leg before appeal is turned down.
Dhawan taps the next ball on the off-side for a single before Rahul plays a delightful drive through the covers for three runs followed by a single to his partner Dhawan.
Ball continues as Dhawan and Rahul pick four singles off the first four balls before the former pulls a short ball which goes for a four after the fielder at deep square leg lets it go through.
The next ball is again as Dhawan miscues the pull shot which falls short of the fielder in the deep for a single.
Liam Plunkett comes into the attack, replacing Willey, who bowled two overs for seven runs.
India suffer another setback as opener Dhawan is run out for 10. He misses the pull as the ball fell on the off-side as the opener went for a quick run but failed to make his crease.
Dhawan made a lame effort of trying to make his crease, having given up hope, maybe he would have made his crease if he had dragged his bat. Morgan nearly made a mess of the run out but in the end managed to break the stumps and run out Dhawan.
A couple of balls later as Rahul is bowled for six as India are left reeling on 23 for three in five overs.
That was a horror shot from Rahul, who tried to counter-attack with a big hit over the off-side but missed it completely and was bowled.
« Back to LIVE