01:42   Hales's half-century lifts England to victory
England 149-5 (19.4 ovs) vs India 148-5 | Scorecard
Alex Hales hit an unbeaten half-century to steer England to a series-levelling five-wicket victory in the second T20 International against India in Cardiff.
Hales smashed an unbeaten 58 from 41 balls, hitting three sixes and four fours to guide England home in a close finish, as they scampered home with two balls to spare.
With 12 needed from the final over, Hales hit Bhuvneshwar Kumar for a six and a four off the first two balls before England collected two more singles to clinch victory.
Earlier, Virat Kohli top scored with 47, while Mahendra Singh Dhoni hit a quickfire 32 to lift India to 148 for five after they were put into bat,
Read more > 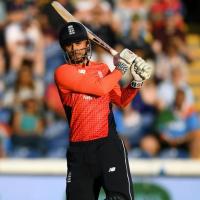 01:37   Hales's half-century lifts England to victory
England 149-5 (19.4 ovs) vs India 148-5 | Scorecard
Umesh to bowl the 19th over. He starts with a good yorker as Willey can only block it back to the bowler before he gets a leading edge off the next ball for just a single.
Hales, who is batting on 40 from 34 balls, is back on strike but Umesh sends down another perfect yorker to beat the well-set right-hander who tries to flick it across the line.
Another yorker as Hales steers it to thirdman for two runs, managing to beat a good flat throw from Rohit from the deep.
Umesh bowls a low full toss which Hales drills through the covers for a four and keeps strike with one from the last ball.
With 12 needed from the final over, Hales turns the game firmly in England's favour as he blasts Bhuvneshwar's first ball for a straight six.
He gets an inside edge off the next ball as he attempts the pull for a boundary before taking one.
Willey pulls the last ball for a single to midwicket to win the match for England.
Read more > 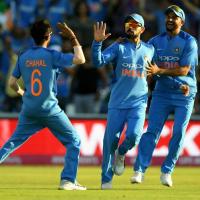 01:27   Bairstow out for 28, England 5 down
England 129-5 (18 ovs) vs India 148-5 | Scorecard
Bairstow lifts England's hopes as he sweeps Kuldeep for a six over the square leg region.
He repeats the shot off the next ball for another six before taking one as England look to attack the spinner and bring the asking rate under control.
Three more singles as Kuldeep goes for 16 in his final over as he goes wicketless to finish with 34 runs from his four overs.
England in control after that huge over as they now require 23 from three overs for victory.
Bhuvneshwar comes back and he strikes with the key wicket of Bairstow, who is caught at fine leg after a quickfire 28 from 18 balls.
David Willey gets off the mark with a single before Hales tries to pull a short ball but misses.
Hales then takes a single to thirdman before Willey misses a full delivery on the pads.
Another yorker on the pads as Willey can only manage a leg bye. An excellent over from Bhuvi as he gives away just three runs, to leave the equation at 20 needed from two overs for victory.
Read more >

01:16   England need 39 runs from 4 overs for victory
England 110-4 (16 ovs) vs India 148-5 | Scorecard
Kuldeep comes back as Bairstow takes a single off the second ball to bring up England's 100, in the 15th over.
Three more singles as Kuldeep gives away just four runs in his third over.
Pandya continues as Hales picks a single before Bairstow pulls a short ball for two runs and repeats the shot two balls later for another couple.
He gets two more runs off the final delivery to pick seven from the over.
England are 110 for four in 16 overs, needing another 39 runs from four overs for victory.
Read more >
01:07   Morgan out for 17, England lose 4th wicket
England 99-4 (14 ovs) vs India 148-5 | Scorecard
Morgan struggling against the spinners as he attempts another reverse sweep and misses but survives the leg before shout.
Hales breaks the shackles as he slog sweeps Chahal over midwicket for a six.
He clips the next ball on the leg side for a couple before he cuts the next ball for a four to get 13 from the over.
Morgan lofts Kuldeep over midwicket for two runs before he smashes the next past long-on for a four.
Hales taking on the spinners as he smashes Kuldeep's flighted delivery straight down the ground for a six to make it 26 runs from the last two overs as England look to inch their way back into the contest.
Kohli continues with Chahal despite England going after the spinners.
Morgan targets Chahal again as he sweeps the leg-spinner for a four through square leg.
The leggie gives away seven from his final over to finish with one for 28 in his four overs.
Pandya comes back and he strikes with the wicket of Morgan, who is caught by Dhawan for 17. The England captain pulls a short ball as Dhawan does well to take a superb catch on the fine leg fence. Dhawan did well to take a few steps back before timing his leap to perfection and complete a brilliant catch.
Jonny Bairstow taps the first ball he faces to the cover region for two runs and then takes one on the leg side.
Hales takes one before Bairstow takes two runs on the leg side followed by one off the last ball.
Read more > 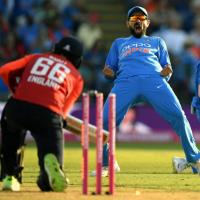 00:49   England struggle after early wickets
England 59-3 (10 ovs) vs India 148-5 | Scorecard
Pandya bowls a tidy over, giving away just five runs in his second over. In the next over, Eoin Morgan is hit on the pads as he attempts the reverse sweep but the huge appeal for LBW is turned down.
Chahal continues as six runs come from his second over, including a wide.
Spin from both ends now as India's hero with the ball in the first match -- Kuldeep Yadav comes in from the other end. Morgan survives another shout for LBW as India again decide not to take the DRS.
Hales attempts to sweep a low full toss from Kuldeep but misses and hit on the pads. The LBW appeal is turned down as India this time decide to take the review.
But the impact is outside the line of leg-stump as the review is turned down.
Just four runs from Kuldeep's first over including three leg byes as England reach 59 for three in 10 overs at the halfway stage. They need another 90 runs from the remaining 10 overs for victory.
Read more >
00:34   Root out for 9, England 3 down
England 44-3 (7 ovs) vs India 148-5 | Scorecard
Hardik Pandya comes into the attack to bowl the final over of Powerplay. Root shuffles across and sweeps the fourth ball where Umesh makes a fine stop diving near the ropes to keep it down to three.
The last ball is short as Alex Hales pulls it over midwicket to end the over with a four as England reach 42 for two in six overs.
With the Powerplay gone, India introduce spin as leg-spinner Yuzvendra Chahal comes into the attack.
He strikes in his first over, with the wicket of Root, who goes for the sweep but misses it completely and is bowled for nine.
That was the googly as Root again failed to read the spinner and perished playing a reckless shot.
Read more >
00:25   Umesh dismisses Buttler; England 2 down
England 33-2 (5 ovs) vs India 148-5 | Scorecard
Bhuvneshwar bowls another tidy over, giving just three runs in his second over, for a total of five runs given away in two overs.
Umesh is unlucky not to strike with the big wicket of Buttler, who hits one straight to Kohli on the off-side but the India captain puts down the simple offering.
Buttler then miscues the next ball as he attempts to hit it down the ground and ends up getting a four.
But Umesh manages to get his man off the final delivery of the over. Buttler fails to make most of the lifeline as he looks to drive a full delivery but hits it uppishly and is caught by Kohli at mid-off to perish for 14.
India right back in the contest as England are reduced to 33 for two in five overs.
Read more > 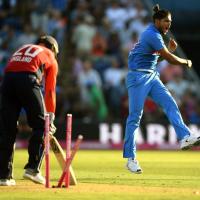 00:21   Umesh strikes early after India post 148
England 25-1 (3 ovs) vs India 148-5 | Scorecard
Umesh Yadav to open the bowling for India. He starts with a dot ball to Jason Roy, before the opener pulls the next through midwicket for a four to get off the mark in smashing style.
Two balls later, Roy clips it through midwicket for another boundary as England show their intent right from the start.
The last ball is again short but Roy pulls it powerfully over the leg side for a six as England get 14 from the first over.
At the other end, Bhuvneshwar Kumar starts off well with the ball. Jos Buttler with a single from the first ball before Roy plays four dot balls in a row and takes a single from the last ball as just two runs come from the second over.
Umesh makes up for a poor first over as he makes the breakthrough with the wicket of Roy, with a full inswinging delivery to bowl him for 15 from 12 balls.
Joe Root walks in at No. 3 and he gets off the mark with a single before Buttler pulls a short ball over midwicket for a four and ends the over in the same style with another four, straight down the ground.
Read more >

PFI, 8 other outfits banned under UAPA for 5 years for terror links