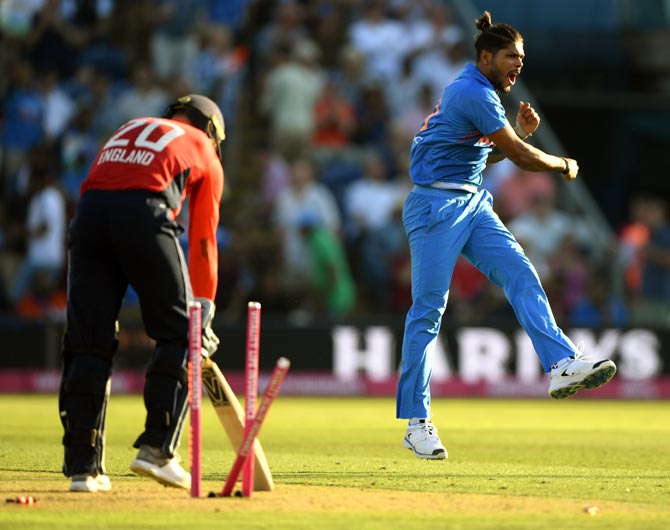 England 25-1 (3 ovs) vs India 148-5 | Scorecard
Umesh Yadav to open the bowling for India. He starts with a dot ball to Jason Roy, before the opener pulls the next through midwicket for a four to get off the mark in smashing style.
Two balls later, Roy clips it through midwicket for another boundary as England show their intent right from the start.
The last ball is again short but Roy pulls it powerfully over the leg side for a six as England get 14 from the first over.
At the other end, Bhuvneshwar Kumar starts off well with the ball. Jos Buttler with a single from the first ball before Roy plays four dot balls in a row and takes a single from the last ball as just two runs come from the second over.
Umesh makes up for a poor first over as he makes the breakthrough with the wicket of Roy, with a full inswinging delivery to bowl him for 15 from 12 balls.
Joe Root walks in at No. 3 and he gets off the mark with a single before Buttler pulls a short ball over midwicket for a four and ends the over in the same style with another four, straight down the ground.
« Back to LIVE