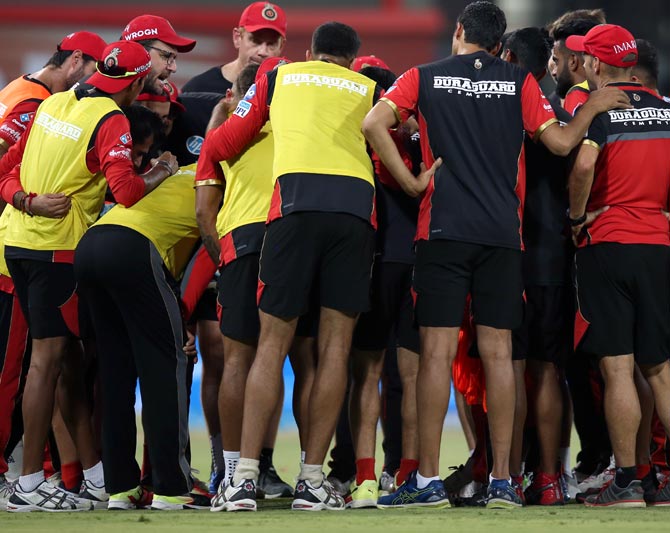 RCB got breathing space after their five-wicket victory over Delhi Daredevils while Kings XI Punjab, after a brilliant run in the initial stages, had back-to-back defeats.

Despite defeats to Rajasthan Royals and Kolkata Knight Riders, they are in the top half of the league with 12 points, while RCB are languishing at the second last place.

Both the teams are overtly dependant on their batting, with Virat Kohli and AB de Villiers holding the fort for the RCB, while the Preity Zinta co-owned outfit looks up to KL Rahul (537 runs) and Chris Gayle (332 runs) for inspirational performances.

However, it is the bowling which has let both RCB and KXIP down on many occasions.

For KXIP, the standout bowler is Andrew Tye, with 20 wickets at an economy rate of 8 per over, while teenage mystery spinner Mujeeb ur Rahman has been exceptional with 14 wickets at a miserly rate of 6.99 per over.

The problem area is skipper Ravichandran Ashwin's inability to get breakthroughs, having had only six scalps from 11 games at 8.13 runs per over.

Axar Patel, the only player retained by the franchise, has fared even worse. In five he has only three wickets in his kitty at an economy rate of 8.73.

Why Kohli changed his name to Simranjeet...

On Monday, during Royal Challengers Bangalore's opening game against SunRisers Hyderabad, in Dubai, the players wore jerseys sporting "My COVID Heroes" to pay tribute to the "Real Challengers".