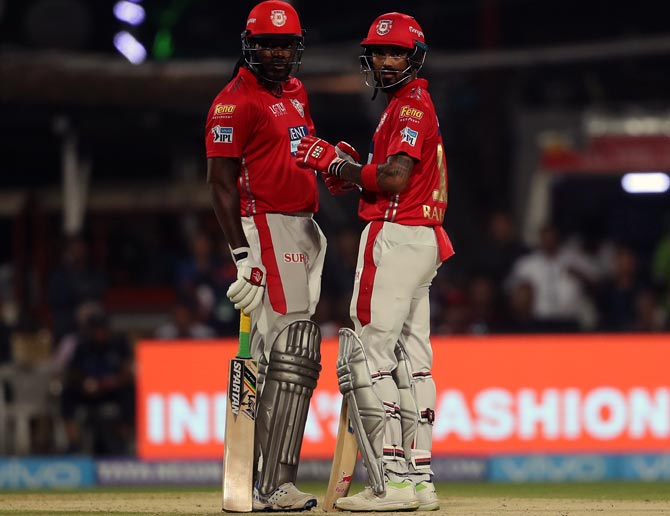 Punjab 14-0 (3 ovs) vs RCB | Scorecard
Umesh Yadav to open the bowling for RCB against Punjab's deadly opening duo of Chris Gayle and KL Rahul.
Rahul picks a single off the third ball to get off the mark before Gayle gets a lifeline two balls later. Gayle flirted at a wide delivery which moved away to take the edge but wicketkeeper Parthiv Patel spilled the catch diving to his left.
A good start from Umesh, conceding just a single and is unlucky not to have picked up a wicket.
Tim Southee to bowl the second over. He starts with five dot balls in a row to Rahul, who makes up for it by pulling the last ball for a six over square leg.
Gayle having some trouble early on especially against the back of length delivery from Umesh as he plays three dot balls before he takes a single to thirdman to get off the mark, from the 7th ball he faces.
Rahul having no problems against the short ball as he pulls it high over fine leg for his second six.
He comes down the track and tries to loft it down the ground but it falls short of a diving AB de Villiers, who makes a good effort but falls short.
A steady start for Punjab as they reach 14 for no loss in three overs.
« Back to LIVE