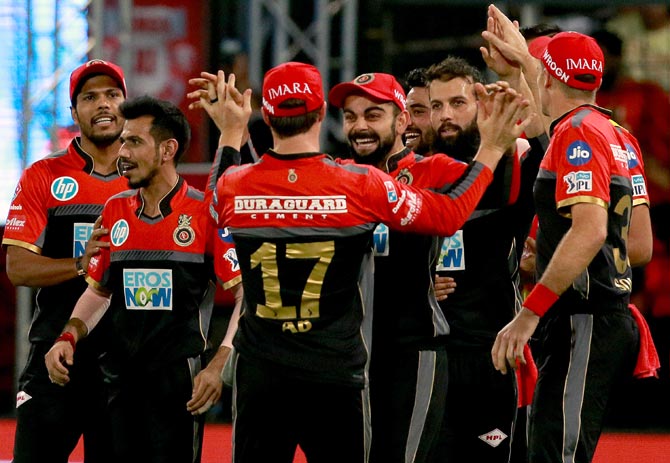 Punjab 88-all out (15.1 ovs) vs RCB | Scorecard
Royal Challengers Bangalore produced a clinical performance with the ball to send Kings XI Punjab for a lowly 88.
Umesh Yadav triggered the batting collapse with two wickets in his third over, that of the Punjab openers KL Rahul (21) and Gayle (18). He finished with splendid figures of three for 23.
Thereafter it was a steady procession from the Punjab with wickets falling regularly as they slipped from 36 for no loss to 88 all out.
Aaron Finch was the top-scorer for Punjab with 26 as eight batsmen failed to even score in double digits.
Adding to Punjab's woes that three batsmen were dismissed run outs in a horror batting display by the Ravichandran Ashwin-led side.
« Back to LIVE

BJP plans mega exercise to reach out to farmers

Union Agriculture Minister Narendra Singh Tomar has held a series of meetings with MPs and Union ministers from Punjab and Haryana and surrounding states, and virtual interactions with state agricultural ministers of all BJP-led National...

It is learnt that the Indian delegation insisted on a time-bound implementation of the agreement finalised during the extensive talks between External Affairs Minister S Jaishankar and his Chinese counterpart Wang Yi in Moscow on...

Indian Air Force's Rafale fighter jet operating over a forward airbase in Ladakh near Line of Actual Control with China.

"The conduct of opposition leaders in the Upper House of Parliament on Sunday was shameful, irresponsible and utter disrespect to parliamentary rules and dignity," Union Minister Ravi Shankar Prasad said.

Goyal said, there is no proposal under consideration on withdrawal of MFN status to China.