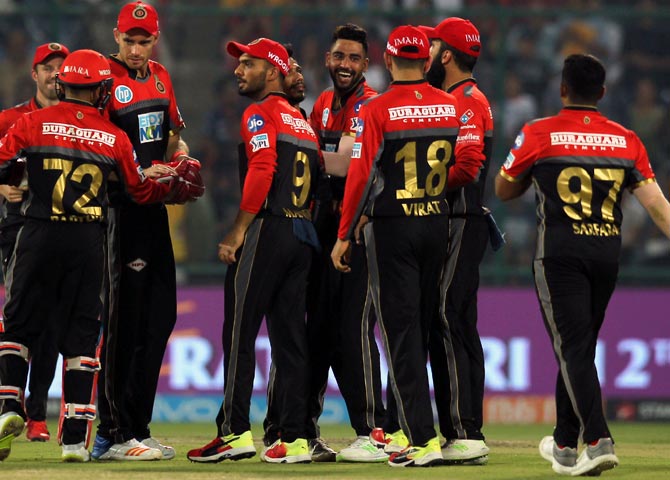 Punjab 41-2 (5 ovs) vs RCB | Scorecard
He has taken some time to get going and now Gayle is ready to cut loose. The left-hander crashes the first ball of Southee's second over through the covers for a four before he ends the over with back to back boundaries.
Gayle is waiting on the backfoot as he pulls Southee over midwicket for a boundary before he lofts a full delivery down the ground for the third four of the over, which goes for 14 runs.
Rahul turns Umesh on the leg side for two runs before he pulls another short ball over midwicket for his third six.
But Umesh gets revenge off the very next delivery and it is the short ball that does the trick.
Rahul pulls a short ball straight into the hands of Colin de Grandhomme at deep square leg to perish for 21 from 15 balls.
Karun Nair gets off the mark with a single before Gayle hits the fifth ball through the covers for a four.
But Umesh strikes once again in the over as Gayle also perishes to the short ball. He plays the pull shot but doesn't get hold of it and is caught at by Mohammed Siraj at fine leg to fall for 18.
« Back to LIVE