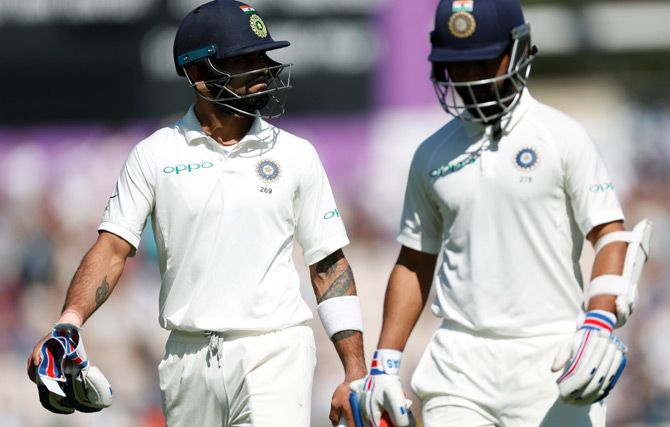 India 104-3 (43 ovs); Target to win: 245 | Scorecard
Rashid looking to bowl a lot of googlies and top spinners, trying to exploit the rough but he has been much easier to deal with than Moeen. He bowls a tidy over to Kohli, denying him a run in the over.
Rahane taps Anderson on the off-side for a single before the pacer beats Kohli with one that moves away late. Kohli then taps it on the off-side and sets off for a quick run and Rahane clips the last ball to square leg for another run.
Rahane tries the googly as Rahane turns it through the vacant fine leg region for three runs to take India past the 100-run mark, in the 43rd over.
A couple of singles before a huge appeal for leg before is turned down against Kohli, who came a long way forward but was beaten by the googly and umpire Dharamsena turns it down before the India skipper takes one off the last ball.
« Back to LIVE