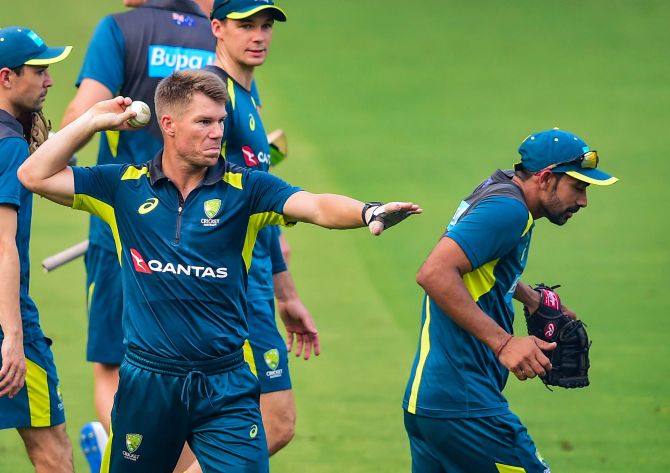 Australia captain Aaron Finch has won the toss and elected to bowl against India in the first ODI at the Wankhede in Mumbai on Tuesday.
Labuschagne to make his ODI debut for Australia.
The young Marnus Labuschagne, easily the most exciting talent spreading his wings on the international cricket map with some stellar performances in the Test arena, would like to replicate his form in the shorter formats.
The high-voltage rivalries that fans enjoy will be back as Rohit Sharma's elegance will be pitted against enforcer David Warner while the Virat Kohli vs Steve Smith duel will resume in earnest.
India's hungry-for-wickets pace attack led by Jasprit Bumrah, Mohammed Shami and Navdeep Saini will be ready to test the Australians with subtle variations.
On the other hand, IPL's costliest foreign recruit Pat Cummins, the crafty Kane Richardson and the ever-dependable Mitchell Starc will leave no stone unturned to make life uncomfortable for Kohli and his men.
Alex Carey's gutsy batting and faultless glove-work will face the challenge of Rishabh Pant's flair.
India have gone in with just one spinner in Jadeja, while Australia have picked two spinners in Richardson and Agar.
India XI: S Dhawan, R Sharma, KL Rahul, V Kohli, S Iyer, R Pant, R Jadeja, S Thakur, K Yadav, M Shami, J Bumrah
Australia XI: D Warner, A Finch, S Smith, M Labuschagne, A Turner, A Carey, A Agar, P Cummins, M Starc, K Richardson, A Zampa
« Back to LIVE