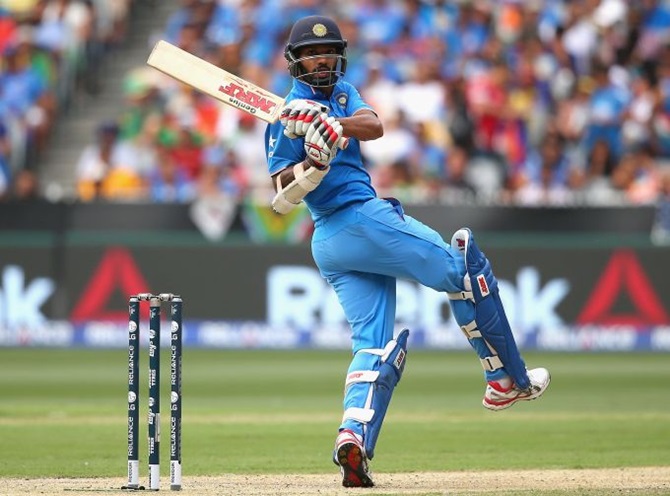 Aus 30-1 (8 ovs) vs Ind | Scorecard
Starc back in the attack at the other end and Dhawan manages to dig out the yorker and survive as the ball was horribly close to the stumps.
Dot later, Dhawan makes room, comes down the track and plays the ball to long-on for a four.
Back-to-back boundaries for Dhawan as he plays the ball past square leg for a four.
Dhawan then gets a single to mid-off off the next ball.
Dot to end the over as 9 come off it.
Right arm medium pacer Kane Richardson replaces Starc.
Rahul starts the over with a single off an inside edge.
Dhawan then plays out two dots before playing a drive to the off side and scampering for a quick single. There is a shy at the stumps but there is no damage done.
Two dots to end the over as two come off it.
Cummins continues and Dhawan tries to play the upper cut but gets a reprieve as Zampa at third man, fails to get to the ball in time. That is a dropped chance.
Rahul then gets a single to square leg.
After a dot, Dhawan is struck on the pads, the ball looks to be going down and the umpire says not out. Australia take the review and they lose the review as the ball was pitching on the leg stump.
A dot to end the over as two come off it.
« Back to LIVE