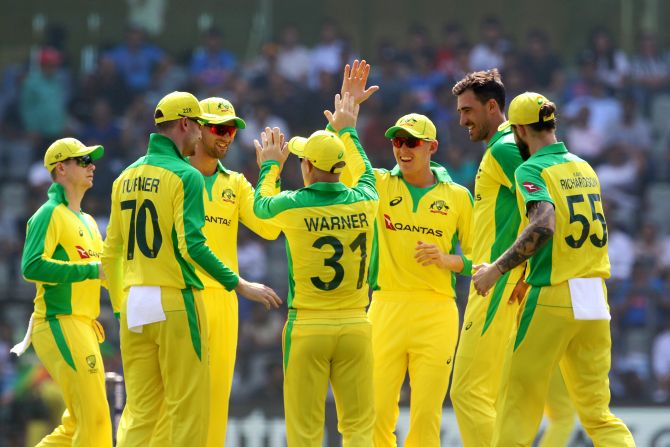 India 255 (49.1 ovs) vs Aus | Scorecard
India are all out for 255 inside 50 overs, with five balls to spare.
After India lost Rohit early, Dhawan and Rahul did well to fight back and put on a 100-run partnership. But their dismissals saw India's middle order collapse like nine pins.
Some rear-guard from Jadeja, Pant and Shardul Thakur at the end helped India cross the 250-run mark.
For Australia, Starc was the pick of the bowlers with figures of 3 for 57.
Bumrah is the new man in as Richardson comes on to bowl the final over of the India innings.
Short ball, Shami has a go at it, the ball goes up, swirls in the air and Carey does well to complete the catch and end India's innings with 9 balls to spare. Shami goes for 10 off 15.
Starc on to bowl his last over, he misses the yorker and Kuldeep smashes the ball through covers for a four.
He bowls a wide next ball before Kuldeep takes a single off the next ball.
250 comes up for India as Shami plays the ball over the non-striker's head to long-on for a single.
Kuldeep then flat bats the ball just wide of Starc to deep mid-off for  a four.
He then gets a single off the next ball before he is run-out by Smith as he tries to sneak a single. Kuldeep goes after a nice contribution of 17 off 15.
Richardson back in the attack and only three singles comes in the over.
« Back to LIVE