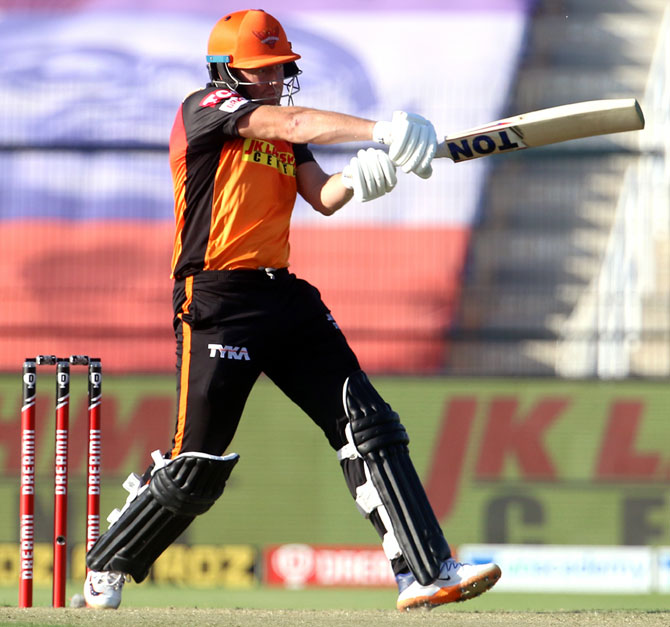 Sunrisers 57-0 (6 ovs) vs KKR 163-5
Cummins is called back into the attack. Williamson drives the first ball through the covers for two runs before he flicks a full delivery over midwicket for a four as he continues to chance his arm and score some quick runs, unable to run freely between the wickets.
Cummins slips it down the leg side as Williamson misses the glance and is hit on the pads before being taken by wicketkeeper Karthik down the leg side and he then picks one through square leg.

Some extra bounce for the Aussie pacer as Bairstow is beaten trying to slash it but he pulls the last ball over square leg for a four to continue Sunrisers' quickfire start.

Mavi is called back into the attack.

Williamson shuffles across before he paddles the full delivery over fine leg for a six, to take Sunrisers past the 50-run mark, in the sixth over.

The pacer bowls a wide outside the off-stump followed by a yorker which is driven to mid-on and the next is carved to short thirdman.

A wide delivery from Mavi as Williamson mistimes the drive and hobbles across for a single and Bairstow steers the last ball behind point for a four.

Sunrisers off to a quick start as they race to 57 for no loss in six overs. They need 107 from 14 overs for victory at an asking rate of 7.6.

Williamson, who was sent as the opener because of his injury, has batted freely to hit 29 from 18 balls, while Bairstow has stroked 28 from as many balls.
« Back to LIVE