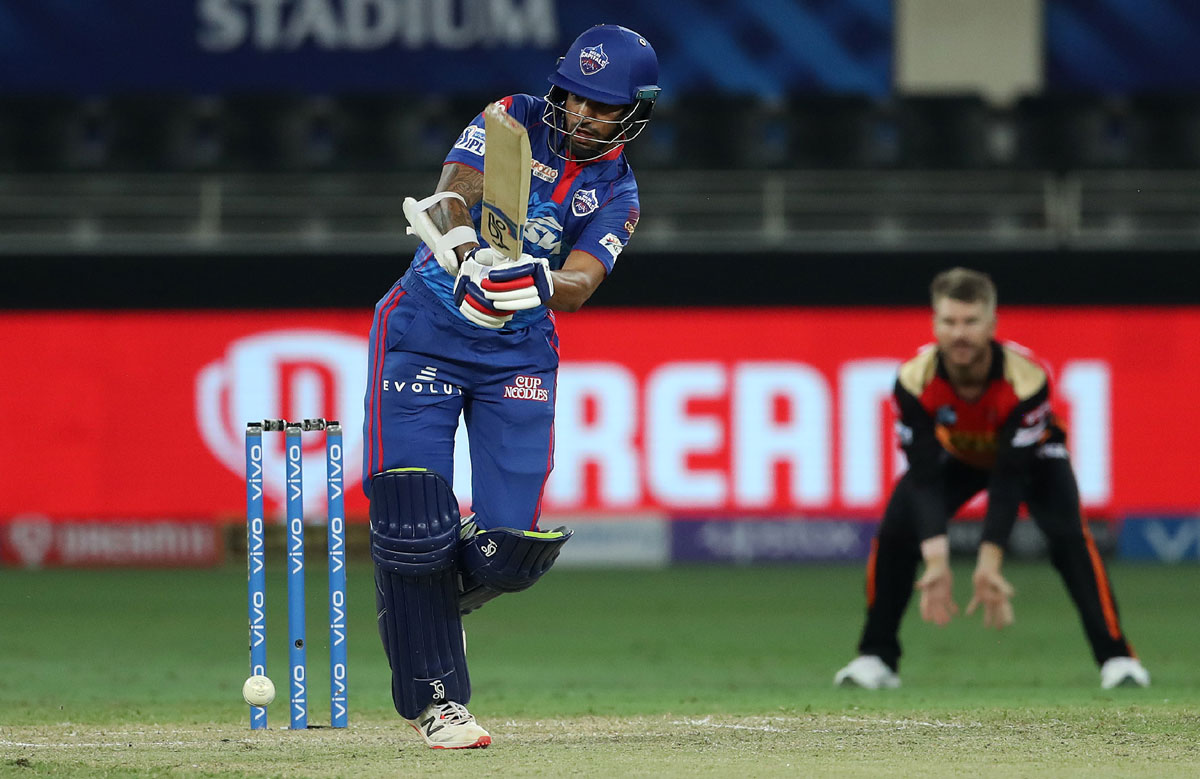 Delhi 39-1 (6 ovs) vs SRH 134-9 | Scorecard
Jason Holder comes into the attack. Shreyas Iyer, making a comeback after a long injury lay-off, gets off the mark with two runs through midwicket.
Iyer pushes at a wide delivery and is beaten before he clips the third ball to square leg for a single.
Holder overpitches as Dhawan smashes it straight down the ground for a four before he comes down the track but can't get the last ball in the gap through the covers.
Bhuvneshwar is back into the attack. Iyer pokes and is beaten again before he hits the next to the fielder in the covers.
Iyer drags the pull shot on to his body as he takes the single and Dhawan takes a risky single in the covers.
Sunrisers in the hunt for wickets as leg-spinner Rashid Khan comes into the attack.
Dhawan pulls the first ball for a single before Iyer chips down the track and drives the next to long-on for one.
Rashid bowls full as Dhawan slog sweeps it over midwicket for a six and nudges the fourth ball to fine leg for another single.
Iyer clips the fifth ball to deep midwicket for one and Dhawan pushes the ball into the covers.
Delhi are 39 for one in six overs, with another 96 needed from 14 overs for victory.
Dhawan has hit 22 from 18 balls, while Iyer is on six.
« Back to LIVE

The HC had in its order last week said Bharadwaj was entitled to bail and its denial would be in breach of her fundamental right to life and personal liberty, guaranteed under Article 21 of the Constitution.

Travis Head smashed a T20-style century to put Australia firmly in control of the first Ashes Test on Thursday as England were hit by an injury crisis during a miserable day two in the field at the Gabba.

The past appears to have interrupted the future of the New Delhi Railway Station (NDLS). With two protected heritage buildings sitting in the way of the plan to redevelop the railway station, officials in the know say the project may end...

Mortal remains of Gen Rawat, others in process of being taken to Delhi

The mortal remains were brought to the Madras Regimental Centre where people paid floral tribute to General Rawat and other personnel.

Group Captain Varun Singh, the lone survivor in the horrifying chopper crash near Coonoor in Tamil Nadu, was conferred with the Shaurya Chakra in August for averting a possible mid-air accident after his Tejas light combat aircraft...