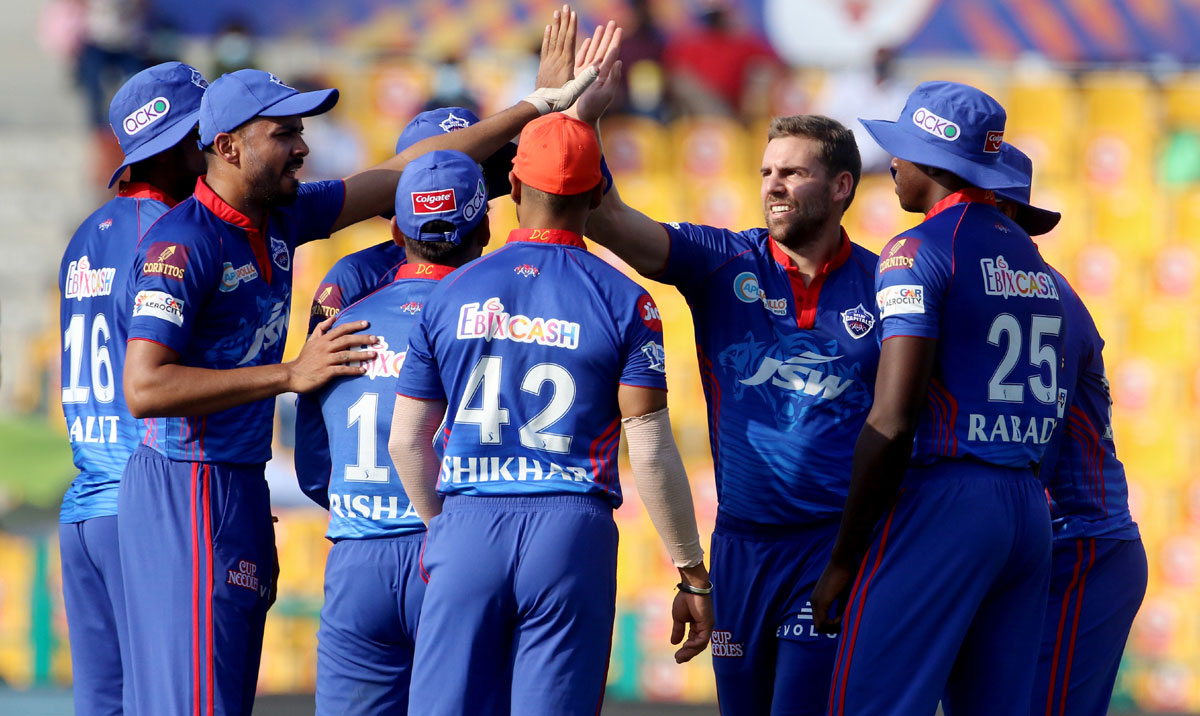 Royals 121-6 (20 ovs) vs Delhi 154-6 | Scorecard
Nortje is back into the attack and he strikes first ball. Tewatia takes on the short ball from Nortje but ends up pulling it straight to Hetmyer on the fine leg fence to perish for nine.
Debutant Shamsi taps the first ball he faces to mid-off and looks for a quick single but is sent back.
A single to Shamsi in the covers as Royals bring up their 100, in the 18th over.
Samson steers a full delivery down to thirdman for a single to keep strike.
Rabada to bowl his fourth and final over. He starts with a yorker which Samson blocks before he scoops the next over short thirdman for a four.
Rabada goes for the yorker but ends up conceding a wide. He follows it up with a slower bouncer as Samson tries to upper cut it over thirdman but is beaten.
Samson slices the fourth ball over the off-side straight to Dhawan at sweeper cover, who puts down the simplest of catches.
An angry Rabada goes for the quick yorker but ends up bowling another wide before Samson keeps strike with one from the last ball.
Avesh to bowl the final over. He starts with a full toss which Samson strokes through the covers for a couple of runs.
Samson chips the third ball back over the bowler and is happy to take the single.
Shamsi drives the fourth ball through the covers for another run and Samson smashes the fifth ball over long-off for a six.
Royals finish on 121/6 in their 20 overs to lose the match by 33 runs as Delhi go top of the IPL with their eighth win from 10 games.
« Back to LIVE

Maharashtra Deputy Chief Minister Devendra Fadnavis on Tuesday said he had proposed to the Bharatiya Janata Party leadership to make Eknath Shinde, who had rebelled against the Shiv Sena leadership, the new chief minister after the...

In a big blow to embattled British Prime Minister Johnson, two of his senior Cabinet colleagues, including Chancellor Rishi Sunak, resigned on Tuesday, as they expressed their loss of confidence in his leadership amidst a spate of scandals.

An alternate aircraft of Indian budget carrier SpiceJet flew to Dubai from Karachi's Jinnah International Airport on Tuesday night, ending a wait of nearly 11 hours for 138 passengers who got stranded there after taking off from New...

A police team from Chhattisgarh landed in Ghaziabad, Uttar Pradesh, on Tuesday morning to arrest a TV news anchor from his house over a case lodged against him for playing a clip of Congress leader Rahul Gandhi out of context. However,...