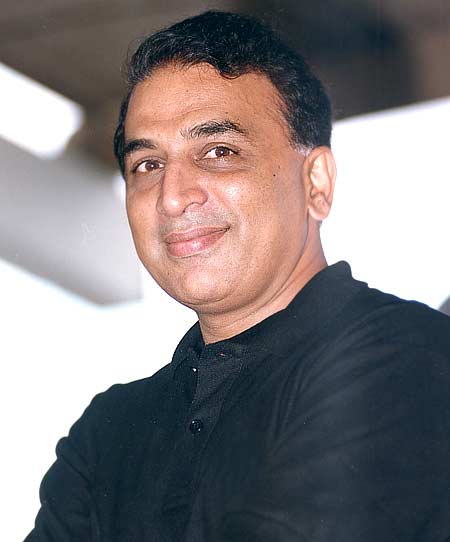 Millions of words have been used all over the cricket world to describe and appreciate the batting of Sunil Manohar Gavaskar. Many more will be employed so long as the game exists and continues to be played. As always, he is bound to figure in every debate, every description, every discussion about the truly great willow-wielders, not just opening batsmen, of all-time.

But not much has been written about Gavaskar's writing and broadcasting skills.

Right from his early days in international cricket he showed promise of being an excellent writer on the game dear to his heart, and excelled both as columnist and author of critically acclaimed cricket books.

Unlike many of today's cricketers, Gavaskar was equally good at studies. A careful, thinking and voracious reader on a variety of subjects, he shaped his scholarly mind as seriously as he sharpened his batting talents.

Both his writing as well as handwriting is impressive. A cursory study of his cricket writings and commentaries convinces you of a strong intellect and analytical mind. 'Over a shorter distance, as in his articles, Gavaskar can write very readably. When he writes as he talks, he reads exceptionally well,' said the late Dom Moraes.

'Pammi can do a lot of things, and quite possibly one day she will write something' 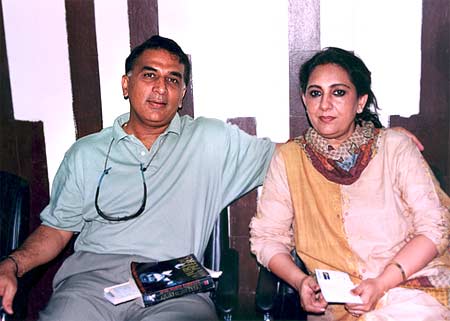 The first sign of Gavaskar's brilliant mental gifts was his widely-read autobiography, Sunny Days, a bestseller that broke all previous records of sports literature in the Indian book market. It was actually journalist Sharad Kotnis's suggestion. Gavaskar liked it so much that he completed Sunny Days in "two or three" months.

Strangely, after it was published, people started saying that Gavaskar's wife Marshniel, affectionately called Pammi, had written it because she was a graduate in English! But Gavaskar ducked the accusations in the same manner in which he had taken evasive action against the world's fastest bowlers.

'Pammi can do a lot of things, and quite possibly one day she will write something. But all the books I've published, I've written myself. The first one, Sunny Days -- well, the manuscript in longhand still exists. Surely that's some kind of proof that I wrote it myself,' he defended, brushing aside all doubts.

Sunny Days hinted at many things for the future as far as its author was concerned. Though popular, it was a controversial book, as Gavaskar hadn't minced words in expressing his ideas and views and called a spade a bloody shovel. Not only did he call certain people names but also compared the fanatic Jamaican cricket fans with unruly monkeys. It's a perpetual delight to read Sunny Days.

In the early 1980s, he produced three more books -- Idols, One-Day Wonders and Runs 'n Ruins. All of them have been acclaimed by many a discerning critic. No Indian cricketer has written as many books.

Acting did not come naturally to Gavaskar 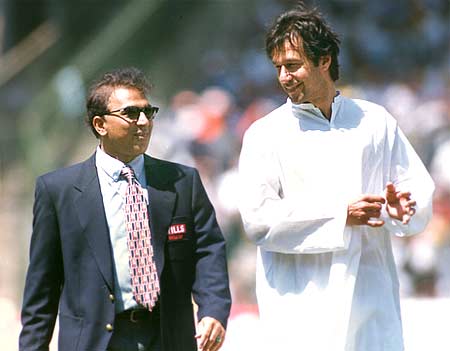 Released just after the packed, eventful 1983 season, in which India won the World Cup in England at the expense of the West Indians, who gave us a thorough drubbing in Tests as well as ODIs on our own soil a few months later, Runs 'n Ruins is a kiss-and-tell sort of book. Typically, the author did not pull punches while writing on one of the most controversial seasons in Indian cricket.

One-Day Wonders is a nicely written book, strongly recommended to those wishing to relive India's famous triumph under Gavaskar's captaincy in the World Championship of Cricket Down Under in 1984-85. The book ends with the repeat victory in Sharjah, bringing a season of hope to a close.

Always very pragmatic, Gavaskar knew how to make the most of his popularity in India and abroad. But then whatever Gavaskar did, when at the height of his prowess and popularity, was generally admired by the press and the public in this hero-worshipping and cricket-crazy country. He would possibly have been given even a special literary award, too, if he had penned a novel, a play or a volume of poetry!

Indians at large welcomed him as a 'model', too, when he appeared in commercials. Why, his only film, Savli Premachi, a 1980 Marathi movie starring Gavaskar as a hero, bombed at the box office was a wonder. Gavaskar played himself in the 1988 comedy film Maalamaal, but neither he nor Naseeruddin Shah, Poonam Dhillon and other stars succeeded in bringing spectators to the cinema halls.

Maybe, just maybe, acting was one discipline that did not come naturally to Gavaskar. He was reasonably successful when he appeared in film, television, newspaper and magazine advertisements. But his success as a 'model' had more to do with his popularity as a cricketer than his talent as an actor.

'Hindi films are made by the asses for the masses' 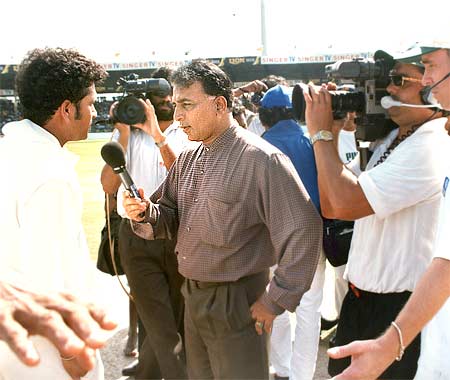 Hindi films are made by the asses for the masses,' he once famously remarked. Former Indian cyclist of international repute and Bollywood baddy Jankidas Mehra objected to Gavaskar's statement by writing a piece in a popular Hindi magazine, castigating the cricketer and advising him to "bother" about his bat than Bollywood.

When someone drew Gavaskar's attention to Jankidas and his rejoinder, the master opener was even more sarcastic in his retort. He was reported to have said: "Janki? Who Janki? I've never heard of such a woman!"

But Jankidas wasn't interested in Gavaskar's witticism. The old man filed a defamation case against Gavaskar, though one has no knowledge of its verdict.

Call it the irony of ironies or whatever, it's a patent fact that Gavaskar failed miserably whenever he has tried his luck as a magazine editor. In spite of success as a cricket writer and commentator, none of the two publications he edited benefited from his name or knowledge.

In 1983, owners of Bengal's leading Aajkaal newspaper made a big blunder, not by launching Indian Cricketer but by appointing Gavaskar editor-in-chief of the monthly, especially when he was still active as a player and at the peak of his career. They probably wanted to capitalise on Gavaskar's magic surname and popularity.

But it wasn't to be. Already poor in quality, Indian Cricketer left much to be desired. Also, it couldn't compete with the three prestigious weeklies -- The Sportstar, Sportsweek and Sportsworld. The much-publicised monthly died a premature death after several issues.

To appreciate Gavaskar's merits as a cricket writer was fine, but to give him editorship of a responsible sports magazine, which requires greater commitment and hard work, was a failure of reason. Instead of learning a lesson from Indian Cricketer and the fate it met with, Sportsweek made Gavaskar its editor in the late 1980s, at a time when it was struggling for survival.

Gavaskar's presence at the helm did not bring any luck to one of India's oldest and respected sports magazines, which had ruled quite well for a shade over two decades, and Sportsweek also closed down in early 1989.

For someone whose name is synonymous with success in whatever he does, Gavaskar's inability in fulfilling expectations of the owners as well as readers of Indian Cricketer and Sportsweek continues to be discussed by sports journalists at times, though he can't entirely be held responsible for the sad demise of the two. 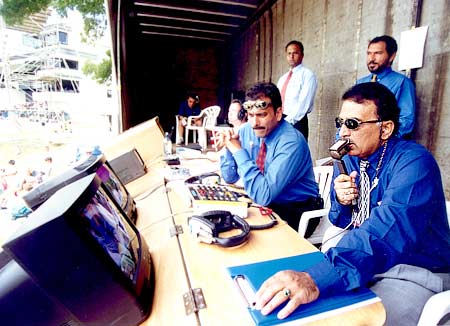 No sports publication has since ventured to make him its editor or chief cricket correspondent. However, his failure in bringing desired results for the two magazines hasn't personally affected his popularity and reputation as a cricket writer.

His columns are eagerly looked forward to, not just in India. He never misses his deadlines. I've often seen him busy writing his copy inside the press box or the commentary room after the match or a day's play.

Clarity, conciseness and humour mark the Gavaskar brand of cricket writing. Cricket writing may not be an art for him, but he always appears a seasoned sportswriter. He is loved and respected for his simple language, smooth style and excellent English, qualities that also reflect in his commentary.

Even if Gavaskar hadn't played the willow game at any level, he would still have made a name for himself as an eminent cricket writer. He may not be the best cricketer-turned-writer -- this honour must go to Peter Roebuck, who has lent a new dimension and an exquisite touch to cricket writing -- but Gavaskar has his own special place in sports journalism.

At a time when many educated Indian players find it difficult to speak a couple of sentences confidently, not necessarily in English, Gavaskar's eloquent connoisseurship as a television commentator is like a breath of fresh air. The atmosphere can never be dull for listeners/viewers, even if the game is boring, when Gavaskar is on the microphone. His descriptive power and delivery are such he could be favourably compared with the best of professional broadcasters.

A brilliant raconteur, Gavaskar is a much sought-after speaker, too. Those, including cricket writers, broadcasters, school captains and coaches, apart from the Marylebone Cricket Club members, who attended his Colin Cowdrey lecture at Lord's (on July 29, 2003) as part of the MCC's initiation of the Spirit of Cricket campaign, vouch for his scholarly oratory.

Similarly, he was at his eloquent best at the inaugural Dilip Sardesai Memorial Lecture at Cricket Club of India in Mumbai on July 2. The audience listened to him with rapt attention just as fans used to watch him with awe when he faced the world's best quick bowlers and spinners with clinical precision.

Indeed, there is more to Gavaskar than just batting, opening the innings, scoring runs and making centuries.