After missing last month's tri-series in Sri Lanka for family reasons, skipper Daniel Vettori and Brendon McCullum returned to the New Zealand squad for the tour of Bangladesh next month.

The team includes one new cap - fast bowler Hamish Bennett - while batsman Martin Guptill, included in the New Zealand A squad for a series against Zimbabwe, has been dropped from the senior team.

"Hamish Bennett has been included in the squad on the back of a solid NZA tour and multiple successful domestic seasons. He is an exciting fast bowler and we are sure he will make the most of this opportunity," said selector Mark Greatbatch. 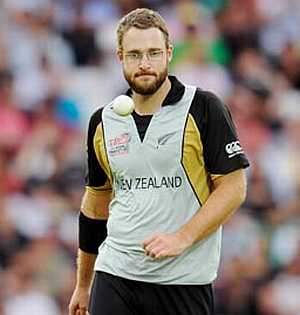 "As we develop depth for the coming 12 months and narrow our focus on the world cup next February, it's important that we give players the opportunity to stake their claims for future selection," he added.

All-rounder Scott Styris has been left out of the squad owing to injury while Jesse Ryder returned after an extended injury break.

On a "last chance" warning for his off-field behaviour, Ryder missed last month's tri-series in Sri Lanka because of an elbow injury. New Zealand Cricket (NZC) issued a warning to Ryder after the batsman was involved in a drunken incident during a trip with his indoor cricket team last month.

The Kiwis will play one warm-up game followed by five One-dayers in Bangladesh.